More than three years after receiving approval from Los Angeles County, the stop-and-start Grand Avenue development project designed by Gehry Partners is finally showing signs that construction may be soon beginning, as developer Related Companies has filed building permits for the project.

The Grand Avenue Project, located at 100 South Grand Avenue across from the Gehry-designed Walt Disney Concert Hall, has been in the works for more than a decade, with an original ground breaking date having been anticipated as far back as 2007. In that time, high profile projects have been completed on all sides of the site, including The Broad museum, designed by Diller Scofidio + Renfro, and the SOM-designed Los Angeles Federal Courthouse.

The development will take the form of two stacked-box towers flanking a canyon containing 200,000 square feet retail and restaurant spaces. The taller of the towers, which will house primarily residential units, tops out at 39 stories, while the shorter, 20-story tower would hold a 350-room hotel operated by Equinox.

Construction on the project is now expected to begin in 2018, with completion targeted for 2022.

After being rejected for appearing too "boxy" and not appealing enough to pedestrians, Related Companies' revamped Grand Avenue vision has finally won unanimous approval from county supervisors. The $750-million plan, which was abruptly halted back in September when Gensler's toned-down version was deemed greatly "disappointing" by the city, will now move forward with a more playful (and pricey) design by the project's original architect, Frank Gehry . 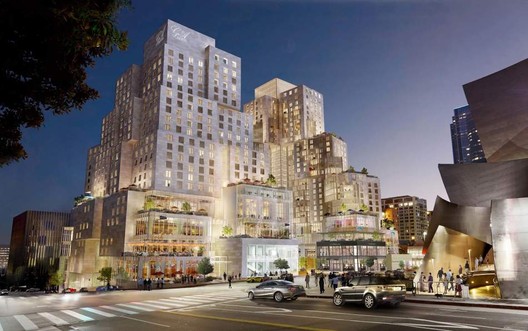