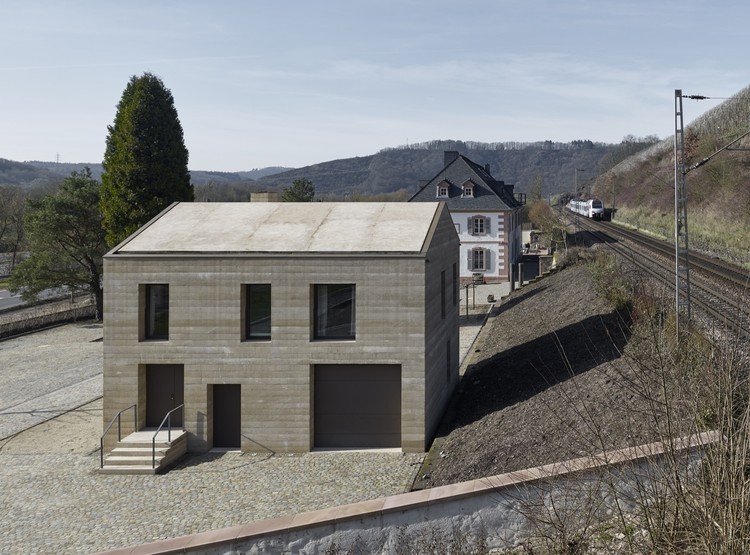 "Gutshaus Cantzheim" is a late Baroque manor set before a stunning backdrop of vineyards in the town of Kanzem, Germany, near Trier. The house was recently renovated and modernized by Max Dudler while simultaneously respecting the guidelines for historically protected buildings. His goal was to revive the extraordinary connection between the architecture and the landscape it inhabits.

Two new auxiliary buildings have also been erected at a respectful distance, accentuating the solitary dignity of the manor house. Bernhard Korte’s understated landscape design further articulates the harmony between the overall ensemble and its picturesque surroundings.

The proud history of the property dates to 1740, when it formed part of the former wine growing estate of the Premonstratensian Wadgassen Abbey. It spent a long period in later years in the hands of the Episcopal Seminary of Trier. Yet in the end, it was the intrinsic beauty of the estate that moved its current owner to purchase it in 2007.

The restoration and development were primarily focused on accentuating the distinctive nature of the late Baroque manor house and drawing the impressive backdrop – the sweeping Kanzemer Altenberg vineyards, with their clearly divided rows of vines – into an observer’s overall impression of the estate.

The manor's Baroque-era sections were accorded top priority and the decision was made to remove later additions. The renovation plans for the interior of the house dictated that the original structure is left intact, but the rooms would be modernized for contemporary use. The coach house was rebuilt to house the manor's technical infrastructure, eliminating the need to cut unnecessarily into the Baroque building materials.

The new buildings, coach house, and orangery were all built at a distance from the main house, yet stand on a single axis with it. When regarding the ensemble from a distance, the alignment relieves the manor house of its dramatic tension and conveys a sense of continuity to the entire extended Baroque property. The overall composition and construction are oriented toward the landscape around it.

The walls of the two-story coach house, including its roof, are produced from rammed concrete. This special technique requires the application of each of its many concrete layers by hand, reproducing the earthen tones of the surrounding vineyards. The orangery to the west of the house is composed of steel and glass and serves to some degree as a counterweight to the monolithic coach house.

The airy structure picks up on the verticality of the rows of vines that dominate the landscape. The axial alignment of the new buildings produces a striking juxtaposition of different eras and technologies: the ancient waters of the Saar, the paved roads as a contemporary form of transportation, the Baroque manor house and the rail line as a nod to industrial modernity.

Situated along the horizon, they form an unmistakable panorama that highlights the successful renovations with amazing urgency. The property can be accessed directly from the Kanzem train station, a feat made possible through the acquisition of a plot around the station’s small forecourt. It once belonged to the state's neighbor, but now ties the late Baroque manor back into the doings of its community.

Since completion, the property has served as a guest house, wine cellar, event room and private residence. The elegant interior design stands in respectful harmony with the existing infrastructure. On the raised ground floor, space was modified to include a commercial kitchen with two dining rooms; the historic vaulted cellar serves as an event space.

The upper floor and attic have been split into three guest rooms, as well as a private apartment with a separate entrance. Two additional guest rooms are located on the upper floor of the coach house. One room at the heart of the Baroque building has retained its original character in full: the former chapel, lit by historical vertical light shafts that even now imbue it with a sacral reminiscence of its former calling.