In many cities, rivers play an integral part in the formation of a local landscape and urban identity, contributing to economics, transport, and recreation, amongst other things. Unearthing the city's rivers to create new leisure spaces is one urban solution that is widely adopted by several cities around the world, in order to capitalize on the existing waterscape. In five years, the capital of South Korea resurrected its main river, the Cheonggyecheon, which had been buried under express streets and viaducts, restoring a sense of peace, green space, and national history to the city. Milan followed the same path: not long ago, the mayor of the Italian city Giuseppe Sala proposed reopening the navigable canals of Navigli for the public to interact with.

And now the Architectural Office in Curitiba Solo Arquitetos suggests that Curitiba join the movement, reopening channeled stretches of the Belem and Ivo rivers, in the center of the city. The project was envisioned for the 2017 Architecture Exhibition for Curitiba, which brings together various proposals to rethink the city.

“The city can take other paths. The spaces can be occupied in different ways", explain the architects involved in the project. "The rivers are seen as a problem, but we see in the reopening the chance to takes up again the relationship of the citizen with the river, bringing more vitality to the degraded center area."

The architects emphasize that additional technical studies are still necessary for the possible implementation of the rediscovery of the Curitiba rivers, but they point out that in the chosen stretches could be installed areas of swimming, canoeing, multi-sports court, a skating rink, stage, gardens, and bleachers.

The Belém river is the most emblematic of Curitiba, not only because of its historical importance in the emergence of the city but also because it is a strictly urban river, with source and mouth within the perimeter of the city. Ivo is an important tributary of the first, crossing crucial areas of the city.

The architects point out at least six different ways of interacting the river with the rest of the city, which can coexist along the Center, and can be with access stairs, grandstand mode, only with ciliary vegetation and hybrid models, as shown in the figure below.

The studied stretches for the reopening of the Belem and Ivo rivers are at Mariano Torres and Vicente Machado Avenue. Both are extremely polluted, according to an assessment by the Environmental Institute of Paraná. Therefore, before the rivers were even unearthed, the de-pollution of both would have to be planned.

News via: Gazeta do Povo / Haus. 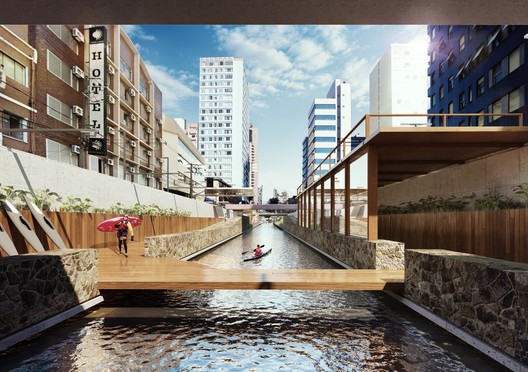