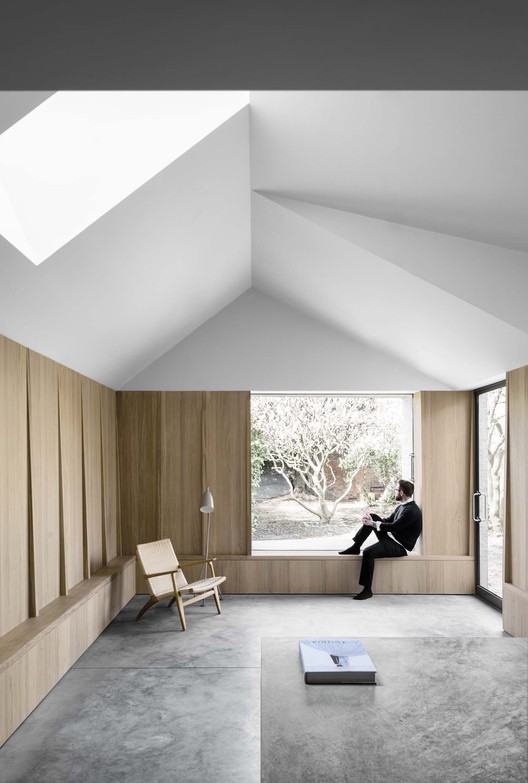 Text description provided by the architects. Kew House involved the complete re-structuring of a Victorian London house and former stable yard in Richmond, turning a house of many small rooms into a series of orchestrated spaces that allow the house to breathe and flow.

The project principally involved the building of a rear extension, comprising of two chamfered forms nestling together. Externally, the extension sits in sharp contrast to the background of the painted-out rear façade of the original house – standing proud and distinct, with walls of pale and pitted masonry bedded down on lime mortar applied roughly and heavily brushed across the brick face.

The simplicity of the exterior belies the complexity of concealed structures, interlocking pitched roofs and wedge shaped walls – all neatly resolved so as not to compromise the purity of form. The faceted nature of the exterior is accentuated by tapering window and door reveals – their depth and shadow lend a massive quality which, together with the rough pointed brickwork and grounding concrete plinths, results in a structure possessed with a sense of mass and permanence, as though carved out of a rock.

Internally, the form and structure combine to produce a dramatic folding and interlocking ceiling-scape, stitching together the two external forms and bringing together the old and new elements of the house. The theme of mass and solidity continues, with in-situ concrete elements defining the arrangement of rooms and providing the backbone to the interior scheme.

A concrete floor floods the interior and forms the visual base to the concrete structural elements on which the scheme pivots: a central spine wall forms the core of the building around which circulation space, the staircase, a cloakroom and the kitchen all hang, and a sculptural concrete work island sits at the centre of the main living space. Views of the garden have been framed through monumental openings, positioned to converge on the mature Magnolia tree at the center of the garden, whose depth provides deep sills on which to sit.

The structural gravitas is tempered by the internal wall paneling and joinery. Slender oak fluting and wall panels conceal extensive storage and give a necessary visual lift and softness to the scheme. As with the faceted exterior, relief is used to animate the interior surfaces. Daylight is carefully controlled through a deep window and roof light reveals, and the paneling extends into the period rooms within the house - running across bay windows in the form of a shutter, filtering daylight and providing privacy, sitting in juxtaposition to the restored Victorian detailing.

A simply crafted oak staircase rises up through the house – ascending from the crepuscular entrance hall, light fills and hallways and landings as the stair climbs. Simple bedrooms and bathrooms finish the scheme and complete the transition from the earthy sculptural massing below. 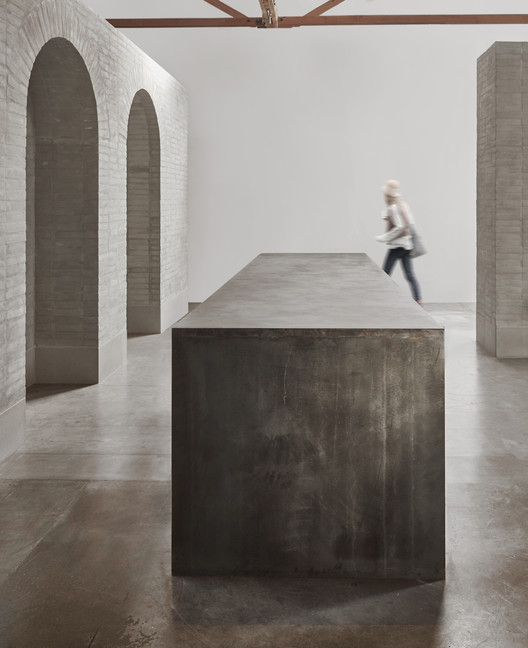