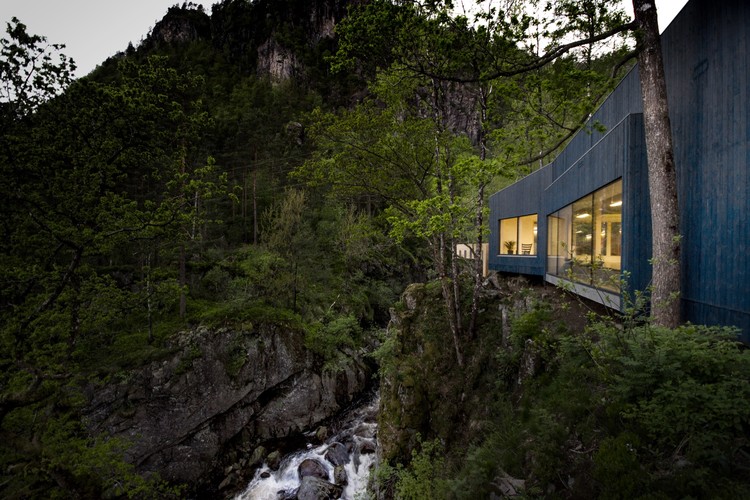 Text description provided by the architects. In 2014 a salmon ladder was opened at the Kvåsfossen waterfall in Lyngdal, Norway. As part of the ladder, an underground artificial pool was included to allow the public to see the passing salmon. Due to the public interest and for practical reasons, a visitor centre was built to accomodate the public here.

The plot just above the salmon ladder provides a spectacular location at the edge of a cliff with the Lynga river at the bottom. As such, the location itself and the visitors´ centre provide a striking contrast between being at the edge of the cliff, as opposed to down below in the underground salmon ladder. In addition the centre is surrounded by dense oak woodland, which adds to the distinctive character of the location.

A part of the experience is to walk the path along the river up to the waterfall, cross an old bridge and pass through woodland back to the visitors centre. With the main road nearby, the building also  needs to provide a screen, such that the landscape can be enjoyed without being disturbed by noise from traffic. This in addition to the fact that the building is visible from the road and provides a signal that here there is something of interest. This dual role is provided by the roof, which due to the buildings low position in relation to the road, acts as a facade towards the road.

The roof is both large and low and has some typical and some unusual characteristics. The sloping roof atop the rectangular plan is in itself typical 70´s style (and thereby related to many of the houses in the nearby village), whilst the juxtaposition of the two roofs, together with the lack of eaves and the roofing material are not. The ventilation units on the roof have a double function as signs, and they also contribute to a subtle effect of being atypical, since they are too large and of the wrong type material to be chimneys or louvers.

From the subdued aspect towards the parking lot, the building opens up internally and is much larger than the first impression from the entrance area. The apparent limited size viewed from the east gives the impression of a residential building, whilst the actual size is much closer to a public building. A third ambiguity lies in the choice of materials and colours. The external cladding is impregnated with traditional tarbased  stain. The smell of this gives the impression of 150 year old building traditions, but at the same time the colour gives a much more modern appearance.

Up in the visitor´s centre a natural favourite with the public is the area in the centre of the building, where you can sit by the window apparently on the edge of a dramatic cliff edge.  This has a lot in common with Jensen & Skodvins ”Juvet Landskapshotell” at another location in Norway (Valldal, Møre og Romsdal) and represents a further development of the close-to-nature effect applied there, whereby in this case the floor is sunk immediately in front of the window to provide a sitting place.

The different windows in the building provide varied views of the river as one moves along the cliff edge. The views towards the dense oak woodland outside give a varied light effect that is best experienced by moving a small distance away from the windows. Some of the light openings are formed as plain glass panes and present ”removal of wall areas”, whilst others have defined frames and present ”holes in the wall”.  The latter are similar to traditional windows and contribute to the ambiguity between the traditional and the modern, which also interacts in the building´s exterior.

This building is both small and large. It is both modern and traditional and it represents both comfortable places for contemplation up on the cliff's edge, and raw encounters with the dripping wet infrastructure of the fish ladder underneath it. 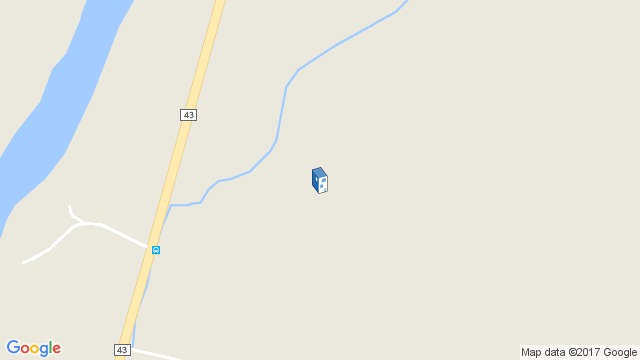 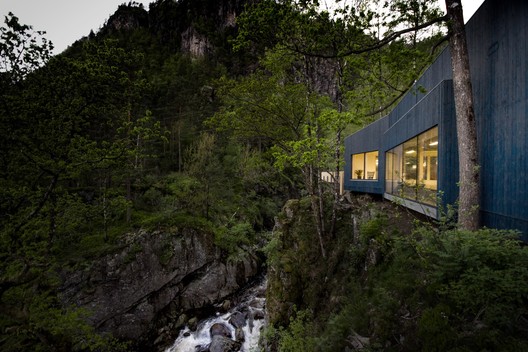