Okuda, the Spanish artist who has been converted into one of the biggest figures in pop surrealism, is continuing his artistic journey in France. After paying homage to the Mona Lisa in the façade of a 19 story building and designing a trampoline above the Seine River, the artist has now taken on the façade of the Valette Castle (1864) in Loiret, which has been abandoned since the 80’s.

The work is titled “Skull in Mirror” and reactivates the Valette Castle whose history links France and Spain. In 1936, during the time of the Spanish Civil War, Republicans purchased the castle, where initially it housed children evacuated from conflict and then later, political exiles. In the 50’s, Spain, under Franco’s rule reclaimed it and used it for holiday camps. Two decades later, the castle was converted into a Spanish school and by 1986 was left abandoned. In 2002, it was acquired by the Pressigny-les-Pins council and a private company.

As the curators at Night Gallery and Ink and Movement explain, in this work Okuda connects his “inspired contemporary vision with classic art and the reinterpretation of artists from the Renaissance, from his own universal and colorful perspective, [in other words] through geometric patterns, multicolored and dreamlike scenes."

“In this more mature period of his my career, to travel and transform space around the world is one of my major sources of inspiration,” says Okuda in an official interview. “The feedback with other cultures has made me feel alive, which is reflected in my creations, which always have a positive outlook,” the artist adds. The LaBel Valette Festival also saw 100 artists create interventions in the interior of the building, thanks to an invitation through the Urban Art Paris.

News via: Ink And Movement, FACEEF. 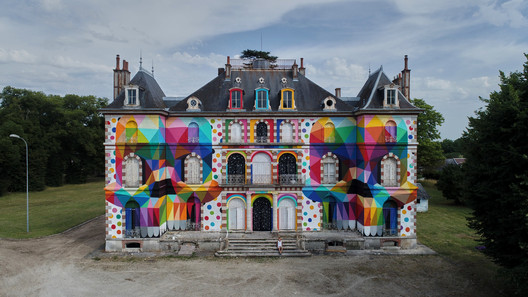