Saint-Gobain’s new corporate headquarters campus in Malvern, PA—the North American home to the world’s largest building materials company—is not a typical corporate campus. As the company approached its 350th anniversary, they set out to build a headquarters that would offer a dynamic showcase for its products.

The company assembled a team of designers from two firms—Bernardon and Jacobs—to transform a long-dormant site consisting of two office buildings into an integrated, world-class headquarters located in the suburbs of Philadelphia. 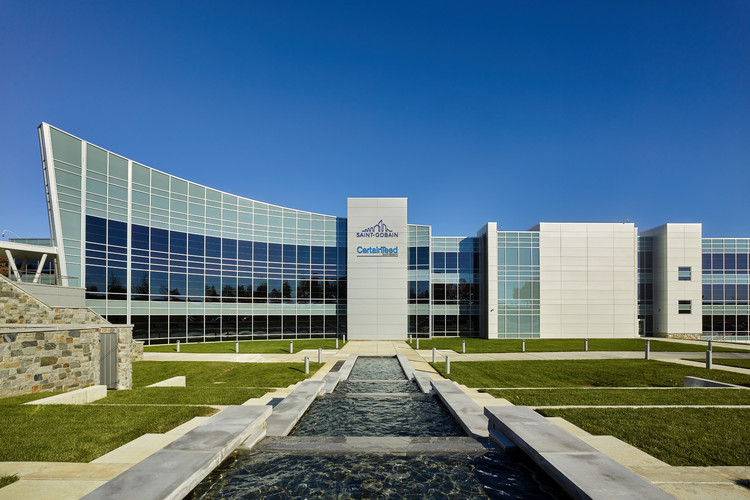 The renovation involved a pair of existing four-story buildings joined by a four-story connecting bridge, which the project team approached as two projects: the core and shell and the interior fit-out. The core and shell project combined a major renovation of the existing building with a 40,000-square-foot (3,700-square-meter) addition to expand the existing connecting bridge. The existing structural system was maintained and reused in the new design. After 18 months of renovations, the 277,000-square-foot (25,700-square-meter) building opened on October 15, 2015—exactly 350 years after the company was founded by King Louis XIV of France to manufacture glass for the Hall of Mirrors at the Palace of Versailles in Paris.

The design of the headquarters has reinvented how the company operates and has signaled a new era for the company and its employees. It includes 116 collaborative meeting spaces; over 800 workstations all with views of the outdoors (including those of the company’s executives, who opted out of corner offices); an acoustically sound cafeteria that is as intimate as your home’s kitchen; a fitness facility that outperforms many neighborhood gyms; a calming natural pond; a scenic outdoor amphitheater that includes a water feature; and 1.3 miles (2.1 kilometers) of walking trails.

Using more than 50 interior and exterior building materials from its own product portfolio, the company sought to set a new standard for the modern workplace—improving air quality, moisture management, daylighting, acoustics, energy efficiency, thermal management and ergonomics. The company’s products can be seen throughout the entire headquarters in glazing, interior glass, roofing, insulation, gypsum drywall, acoustical ceilings and wall coverings. The company’s own building scientists collaborated with the design team on the selection of the right combination of products to achieve goals set out for the project, such as earning the U.S. Green Building Council’s LEED Platinum certification for both commercial interiors and core and shell. Here’s a look at some of the key strategies the building incorporates to achieve a work environment that pays major dividends when it comes to the well-being of employees and the environment.

1) The designer for the exterior and lobby, Bernardon, installed 17,000 square feet (1,580 square meters) of SageGlass on the western and southern elevations of the façade. SageGlass was selected for its ability to dynamically control sunlight, optimize daylight, maintain outdoor views and enhance comfort by preventing glare and solar heat gain. By controlling sunlight, SageGlass dramatically reduces energy demand and the need for HVAC, while increasing employees’ comfort and well-being. The electrochromic glass incorporates SageGlass LightZone™ technology so it can have three different zones of tinting within one pane of glass to maximize daylight and allow employees to comfortably enjoy unobstructed views of the natural environment, which has been shown to boost productivity and satisfaction in the workplace.

2) The entrance way features Sheerfill® Fiberglass Architectural Membrane coated with Teflon® to create a stunning architectural profile that can be appreciated day or night. The design team selected Sheerfill because it lets through natural light while still protecting employees and visitors from the elements. At night, LED lights are directed up toward the canopy, and the membrane’s highly reflective white surface makes the most of the effect, lighting the expansive pathway to the building.

4) The irrigation system and water feature utilize harvested rainwater, eliminating potable water use. Rainwater is collected from a 7,000-square-foot (650-square-meter) roof area and stored in a 25,000-gallon (95,000-liter) cistern on-site. A stormwater management plan was implemented on-site, including an underground detention system, infiltration trench, and four rain gardens, all to infiltrate stormwater on-site and inhibit impact to local waterways.

1) Designed by Jacobs, the interior of the headquarters boasts an open-concept design that provides views of the outdoors from virtually every one of the 800+ workstations. The interior design minimizes barriers between groups, with flexible configurations ranging from smaller quiet rooms to large conference spaces to encourage collaboration and inspire creativity.

2) By leveraging products from the company’s portfolio, the company has created an environment that is open, yet still quiet and conducive to concentration. For example, an employee can have a conversation on the phone at their desk without worrying about disturbing the employee next to them. Rooms designed to accommodate training sessions are designed to allow sound to roll across the room, so people in the back can hear just as well as those in front. This is made possible through the use of sound absorbing materials from CertainTeed, such as Gyptone Quattro perforated ceiling panels. In addition, Ecophon® Focus™ Ds and Solo Hexagon combine style and performance in the headquarters for a quieter, more productive workplace.

3) In the interior of the headquarters, several different products were chosen to help the company achieve the building’s indoor environmental quality goals and to create a positive impact on the health of employees. Novelio® CleanAir Wallcovering is used in conjunction with Novelio® Mold-X Wallcovering. Novelio® CleanAir Wallcovering has the ability to trap and neutralize 70 percent of harmful aldehydes and sanitize the air, whereas Novelio® Mold-X Wallcovering features an antimicrobial coating that actively repels and kills fungus and black mold. CertainTeed AirRenew® gypsum drywall was also used to absorb VOCs, providing additional indoor air quality enhancement.

Setting the Stage for Future Innovation

Saint-Gobain’s headquarters is designed to set the stage for future innovation. For the first time, the company’s largest subsidiary in North America, CertainTeed, has its entire research team integrated with the company’s operations team in one location. The company believes that by bringing together the long-term insights of marketing with the deep customer experience of sales and combining them with the expertise of its scientists in one central location will yield better products and solutions for customers and consumers.

The research and development facility—The Malvern Innovation Center—is adjacent to the administrative office building. Here, the research team benefits from working in a “living laboratory” environment where it can directly measure the impact its technologies have on workplace environments. This includes experiencing the comfort and enhanced productivity of a conference room that is acoustically sound or breathing easier thanks to air-purifying and mold-resistant gypsum.

In fact, the company is collaborating with Associate Professor Ihab Elzeyadi at the University of Oregon’s School of Architecture and Allied Arts to study how the materials enhance the wellbeing of employees. In late 2017, the company will be sharing the results of several studies being completed, but has already received some positive data that shows the headquarters is paying off. In the first three weeks of occupancy, the Call Center increased productivity 140% in the new building, with no changes in hours or staff. These employees have demonstrated higher energy levels (attributed to air quality and lighting); shown increased collaboration, peer support, accountability, and even heightened competitive spirit (attributed to the open floor plan); and shown greater focus with less distraction (attributed to the exceptional acoustics). In the first five weeks of occupancy, the Sales Support Group increased lead-generation performance over 150%, compared to same period in 2014.

NewsArticlesSaint GobainMaterials
Cite: "How the World's Largest Building Materials Manufacturer Used Its Own Products to Create a World-Class Headquarters for Its Employees" 14 Jul 2017. ArchDaily. Accessed . <https://www.archdaily.com/875785/how-the-worlds-largest-building-materials-manufacturer-used-its-own-products-to-create-a-world-class-headquarters-for-its-employees> ISSN 0719-8884
Save