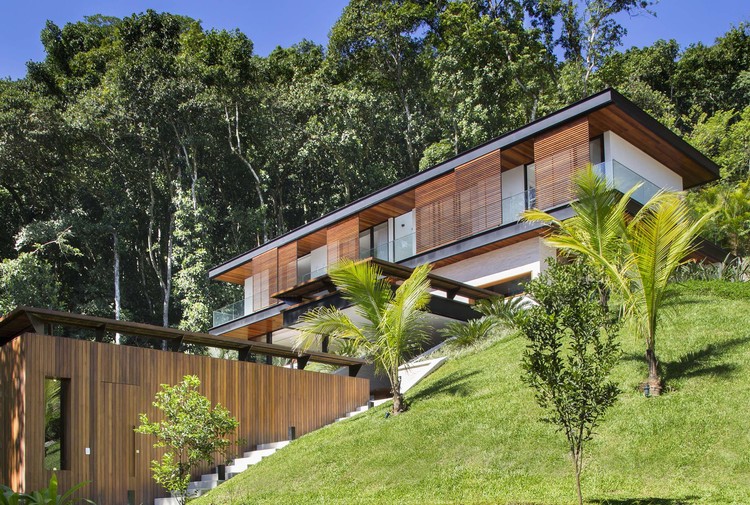 Text description provided by the architects. The project starts from the interlocution between a topography that, concomitantly, shapes and is shaped by architecture. Conceived by the architect Marcelo Moura, from the Rio de Janeiro office Tripper Arquitetura, the residence is composed of a succession of overlapping plans, each one starting from the encounter with the ground to launch itself in cantilever, a fact that ends up establishing a double condition: The house is contiguous to the land, providing a perception of single-storey house on all floors, while the floors become slabs in suspension, that is, terraces in height. Through them, the architectural proposition approaches the tradition of the great Brazilian colonial house - the house surrounded by the generous porch. These solariums and balconies are the intermediation between the intimate spaces of the house and the exuberant natural landscape that surrounds it.

Located in Mangaratiba, on the coast of the state of Rio de Janeiro, the steep terrain is just a few minutes from the beach, but not in its view. What is unveiled is the vast mountain panorama, with a sequence of mountains covered by the Atlantic Forest. Portobello House is respectful of the existing nature of the land: it occupies a relatively small area of the lot, with little land movement, and uses constructive methods - especially the metallic structure - that minimize activities In loco and the size of the construction site.

In the basement are the areas of fruition. Embedded to the ground, the volume emerges at the top of which is the blue, L-shaped pool in which the artifice of the "infinite border" is laid. Even though it is structured in concrete, what we see of this lower prism is a combination of the water and the wood cumaru of the boards that line the walls and make up the deck. Almost imperceptible to those who, when climbing the ramp of access to the land, observes the whole set, a discreet door in the middle of the wooden rules of the basement leads us to the closed environments of leisure - games room, cinema and sauna. At the pool side, the solarium is contiguous to an enclosure covered by the upper suspended plane: in this space is the barbecue and a glass supporting meals and outdoor gatherings.

Climbing the steps of the stairs (identicals, but misaligned) that sit on the grassy slope, we arrive at the central plateau of the building - the ground floor of the house. A long contention wall of stone provides the fit of the edification to the relief. At this point there is also the end of the curved access road of the vehicles and then the plateau with wooden floor that surrounds the residence. There is a prominent section in it that launches in a cantilever structured by metallic I profiles. The protection of the limits of this enlargement of the deck does not happen by a conventional railing but by a bench with seats in cumaru wood and erected by thin and precise plates of steel of trapezoidal format that allow a slight expansion beyond the perimeter of the floor .

The House Portobello consists of a metal structure with a square modulation of axes distant six meters from each other. On the social floor there are two modules for socializing (living and dining rooms in a unique environment), characterized by total transparency and continuity between exterior and interior - large glass sliding doors make this diaphanous mediation. On the other hand, the other module, in which the services are (kitchen, laundry, lavabo), is more closed and secluded under a wall covered in stone fillets - which in a way corroborates the tactile nature of the different plans and closings of the residence. These internal spaces are surrounded by a kind of porch (that is, by the slab of the upper storey in a swing), which protects the room from a higher incidence of the sun's rays and the weathering.

There is something solemn and astonishing as we climb up the inner staircase: we start with steps in travertine marble blocks, then we have a linear sequence of swaying wooden boards, where we can see the transition from the wide, horizontal area of the room to the narrow and vertical space above the skylight that is bathed with the atmosphere of natural light, and finally, unexpectedly, we do not reach a raised pavement, but a passageway contiguous with a small intimate garden - a brief lawn between the house and the beginning of the hill with the bush. If, at the back, we have a corridor glued to the ground, by the front facade we see the floor as a piano nobile.

In this floor, there are four suites arranged side by side. The rooms open to both sides - obtaining the proverbial cross ventilation, more than justified by the simultaneous coastal and mountain air of the place. On the other hand, the bathrooms are connected with the exterior always by the skylights in the ceiling, so the relation takes place by the sky, with a changing game of light and shadow, that distinguishes each season, month, and time of the day. This set of suites is surrounded by a generous balcony, which ends up having a double function, both of communication between the rooms and of being to contemplate the landscape. External to the double glass railing, the protection against excessive afternoon sunshine is made by six movable panels composed of horizontally parallel wooden battens. There is clearly a material correspondence between vertical and horizontal planes, between the brise soleiuls and the roofs in cumaru of the upper porch and the lower porch. The beacon of such relationships are the beams in metallic I profile (as a contemporary entablature) that structure and surround the slabs of both the floor of the suites and the roof - this, a flat slab covered with expanded clay.

In addition to being a large residence with different spaces for leisure and rest of a family at weekends, there is in the proposal a set of references of a 30 years old architect that consubstantiate in the design rich in constructive details and in the regimentation of different materials. In the first and last instance, we are dealing with a project that seeks to reconcile natural soil with architectural ingenuity. 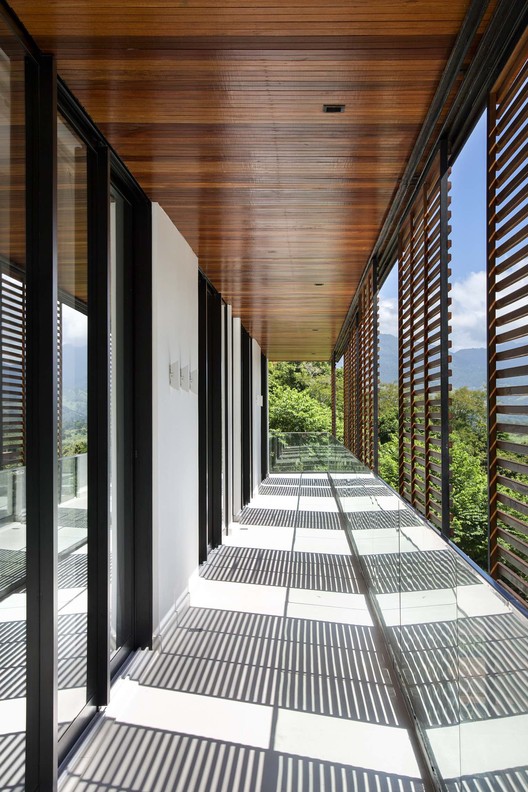