#donotsettle is an online video project created by Wahyu Pratomo and Kris Provoost about architecture and the way it is perceived by its users. Having published a number of videos on ArchDaily over the past two years, Pratomo and Provoost are now launching an exclusive column, “#donotsettle extra,” which will accompany some of their #donotsettle videos with in-depth textual analysis of the buildings they visit.

After a stop in Doha to visit IM Pei’s Museum of Islamic Art, and a peek inside MVRDV’s house office in Rotterdam, we are bringing you to Shanghai for our 3rd #donotsettle Extra column. Last week we visited OMA’s first project in Shanghai, the Lujiazui Exhibition Centre, and had the privilege to get a sneak preview before it opens to the public in the next months. Please tag along! 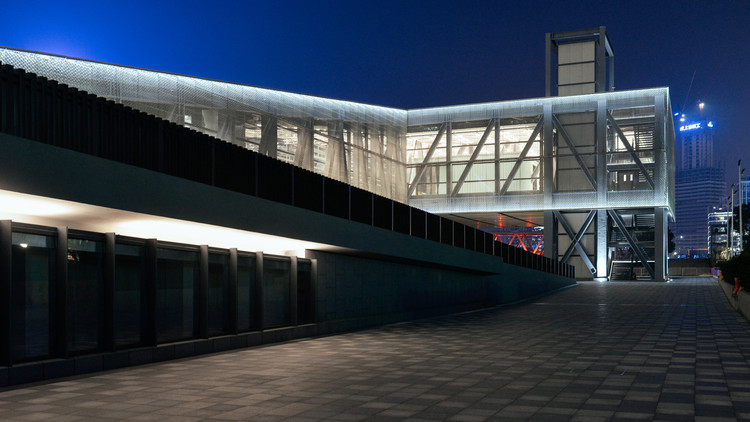 The building sits at the riverfront, but it also abuts the city edge. It forms the buffer between two elements defining Shanghai, a city bursting out of its seams on both sides of the river. As with many cities, the riverfront forms a delicate spot requiring special attention. On riverfronts, filled with history and heritage, architects and urban planners throw their concepts out into the open, and Shanghai is no different. Due to a strong desire to create a continuous riverfront trajectory on both sides of the river, construction is happening at speed. With constant drilling noises in the background, we were able to visit one of the buildings furthest along in its construction. Looking left and right sparks our curiosity over how this building will fit into the former Shanghai Shipyard development area. This exhibition center isn’t just a building along the riverfront. It’s bringing visitors into the city, and showcasing the city to visitors.

Connecting Past and Present

Located in what was once the large Shanghai Shipyard, the project uses the large gentle slope as the guideline for its design. The event spaces are built upon the existing ramp, and use its characteristics to shape the building around it: With the old slope connecting with a new slope descending in the opposite direction, the project connects the past with the present. Therefore, despite being a new building, this project fits within and expands OMA’s preservation portfolio.

Mixing indoor with outdoor spaces, this rather small-looking project packs a lot of possibilities into a tight envelope. As with many OMA projects, it appears that the space in-between the structures both forms and uplifts the building. By using the slope to lift up the main event space, a series of secondary event spaces are created by the enclosed box. Underneath, adjacent to, and leading up to that main space are spaces that turn a single opportunity into a series of possibilities: the main space, by being raised, creates the chance to overlook the river; the space beneath forms a sheltered outdoor space; the space adjacent to it, on the slope, can be used as an outdoor cinema using the main box’s façade as a projection screen. The space leading upward to the main space forms an auditorium. With a single architectural intervention, a series of spaces were created, making the space in-between almost more exciting than the main designed area.

The building stands out--that enormous cantilever makes sure of that. But moreso than the cantilever, the building’s rough appearance, in contrast with the shiny and polished skyscraper facades in the background, marks it as something different to its neighbors. Showing the heavy structure, which makes a cantilever of that size possible, goes against what the skyscrapers do. Hiding all structure and camouflaging all technical equipment, the skyscraper presents an ideal image. This building doesn’t do that--it does the opposite, in fact. Staircases, elevators and mechanical equipment is visible. This aligns with the previous function of the plot. Heavy industry once ruled this place, before it got pushed out by the service industry. The men in suits pushed out the men in hard hats. With this building a bit of that heritage is maintained. Is this OMA’s way of keeping a legacy? (The building will however mostly be used by people in suits. Quite contradictory isn’t it?)

As with many of OMA’s buildings a storyline becomes clear when observing and dissecting the project in detail. With a single gesture a storyline with subchapters is created. Multiple event spaces are created that will benefit both the building’s users as well as the city’s residents. The venue shows a lot of potential to become an important spot within the riverfront development. And we appreciate the roughness, a style that is becoming more apparent in the city structure.

OMA, thanks for letting us into the building pre-opening! 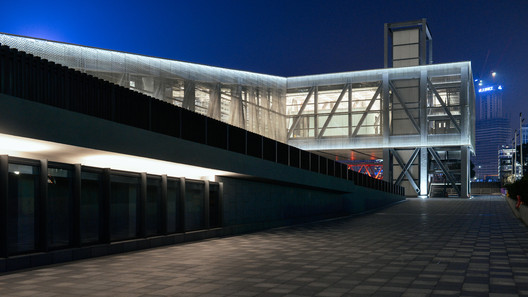