Text description provided by the architects. The Parque da Gare, created in the 80s, is located next to an old railway station. The derelict state it was in and the fact that it was located right in the centre of the city of Passo Fundo motivated the council to start a project for its comprehensive urban and landscape revitalization keeping some historical and natural aspects, but under a new design for the park and introducing new infrastructures. This would be the case of the farmer’s market, which would take over the one which had been running on the plot of the old station, a restaurant with an information desk included which would improve the role taken on by a small outdoor bar, a bathing and maintenance area and, lastly, a multipurpose library area located in the lowest part of the park, next to the lake, fully integrated into the design.

The urban area is designed so as to generate both areas for coexistence and contemplation. The urban intervention differentiates the inside of the park, where concrete is used for paving, from the outside, where regional stone is used, as in the rest of Passo Fundo. This creates a link between the city and the new park.

Plus, several retaining walls, bridges, footbridges and buildings were erected in order to overcome some barriers, derived from the complex topography, and to organise the space.

Along the paths, the different materials appear gradually: timber, cement…These spatially organise the park and its uses. Children’s games and pergolas are also incorporated.

LANDSCAPE DESIGN
The landscape design is based on using autochthonous species. The specimens are chosen according to their size, colour and the functions they’ll have to fulfil at each point, making it possible for there to be a shade control, and the results are in line with the spatial and aesthetic decisions made.

The design of the urbanised area maintains that same purpose. Hence, beside the lake, small boulevards are lined with short trees, in a South-North arrangement, in order to reduce shade and increase the oxygenation of the water and colourful trees are placed to contribute a chromatic difference from the constant green.

Given the high number of pre-existing trees, new specimens are planted in certain areas with the idea of generating a certain homogeneity and of organising the different zones. Lawn areas are also generated for the hosting of all sorts of activities.

FARMER'S MARKET BUILDING
The Farmer’s Market is set in an area with a considerable slope, with a level difference between two streets of around four meters. To get around this, the building has two levels with different heights and stair and ramp access, making all areas accessible.

Given the climate conditions of Passo Fundo, the building houses all its programme inside and keeps a direct connection with the two parallel streets and the adjacent parking zones, which include loading bays and parking for customers. The inside is organised by ramps into three areas at different levels. The first one, linked to the Sete de Setembro Avenue, is destined for toilets, stockrooms and building services rooms. Going down the ramp we find a second intermediate area where the food is located. It’s linked with the park through the East entrance. The lower level corresponds to the cool area and the access from the Rua Capitão Bernardo and the parking area.

The building has a mixed structure made of concrete and metal. The concrete corresponds to the base, in contact with the soil, and in turn is made up of pillars, beams, retaining walls and prefab slabs. This structure offers support to the metal one, which spatially organises the building’s envelope by means of pillars and beams for the sides and the roof. This generates a great central space, free from pillars. The roof is the result of metal mesh placed over metal trusses and the envelope, thus creating continuity between the façade and the roof.

The openings in the façade serve ventilation and illumination purposes. Their layout grants a certain rhythm to the longer elevations.

The great openings on the upper part of the building generate spatial continuity between the inside and the exterior.

THE LIBRARY
The special division of the terrain into two levels in the lower part of the park also affects this project. In fact, the lower pavement is half buried.

The lower part of the building is made of reinforced concrete. Given the slab that covers it (intermediate slab from the library), a uniquely shaped prism is developed with a metal structure and a masonry envelope that includes some glazed surfaces.

The ground floor contains the functional core that concentrates the wet areas, with public toilets, the exterior staircase that leads up to the upper floor and the required infrastructure for the outfitting of a small restaurant. All these uses are concentrated next to the retaining wall, leaving a great sheltered area beside it which can host all sorts of events.

The upper floor is organised as a multipurpose area, to be used as a digital library. It also includes a small toilets cluster and a reception, and entrances on either side. The idea is for it to be used in conjunction with the existing plaza on the upper level. 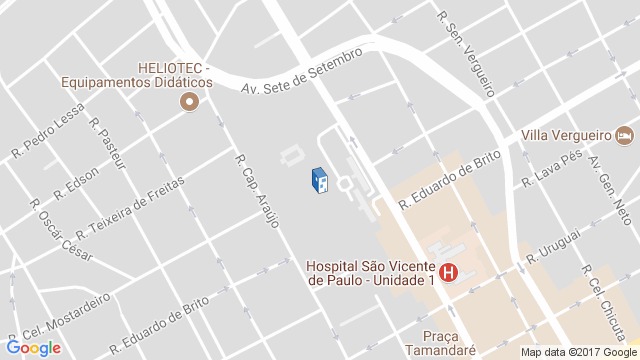 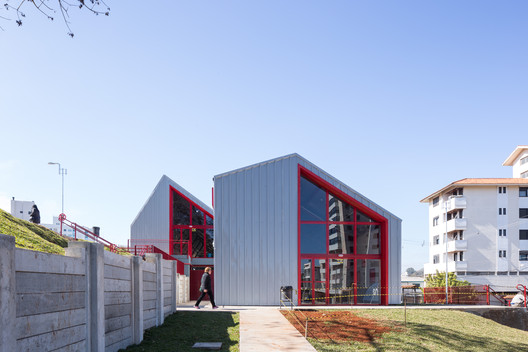