MVRDV have broken ground on a 3,700 square meter creative office project in Amsterdam, Netherlands. Named “Salt,” the new flexible workspace is part of the Minervahaven port redevelopment located on the city’s harbor. Conceived as a response to the lack of flexible workspaces in Amsterdam, Salt aims to provide small, high-quality offices geared towards the demands of creative industries. The building contributes to Minervahaven’s ambition to redefine itself as the city’s new creative hub.

The area around Minervahaven still has an industrial feel to it due to its scale which is different from older harbour areas that have been transformed in the past. So no bricks here - but concrete as a base for the new volumes. Our design reflects this industrial heritage, by creating concrete loft-like spaces using exposed and raw materials, but also by opening up the façade to great views of the harbour - Jacob van Rijs, co-founder MVRDV.

Rising to a height of 5 stories, Salt is a 30m x 30m x 20m cube-shaped volume with concrete frames stacked on top of each other. Windows are arranged in a random order so that the buildings' distinct glass and concrete façade offers a different view on each side of the building. The loft-like interior spaces are deliberately sparse: no hung ceilings exposed materials such as concrete, aluminum and steel, and flexible floorplans. The building aims to generate a portion of its own energy through a solar-panelled roof. Companies can rent spaces ranging from small units to an entire floor. A private roof garden acts as a social gathering area on the south facade of the building while the full height lobby featuring a grand staircase connects the various levels.

The Salt Office project is set to complete construction by January 2018.

Amsterdam based project development corporation NIC started sale of the designed Alphabet building. In Amsterdam small and mid-size creative companies have trouble finding suitable office space. The Alphabet building communicates through a clear exterior design which reveals on the East façade the house number and at the main façade the extension for each company, a letter of the alphabet.

What Is It Like to Work at MVRDV? A Video Tour with #donotsettle

donotsettle is an online video project created by Wahyu Pratomo and Kris Provoost about architecture and the way it is perceived by its users. Having published a number of videos on ArchDaily over the past two years, Pramoto and Provoost are now launching an exclusive column, "#donotsettle extra," which will accompany some of their #donotsettle videos with in-depth textual analysis of the buildings they visit. 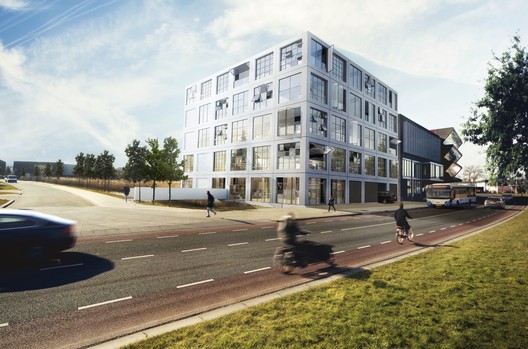