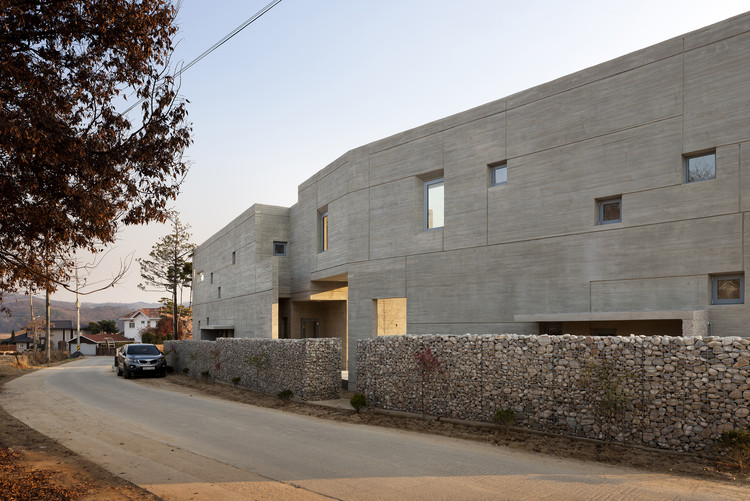 Text description provided by the architects. The client, in his early fifties gentleman running a local business, bought a land near a scenic lakeside in Asan city. When we visited the site with him, tall and handsome pine trees were standing around the lengthy perimeter of the site. It was impressive to feel the dramatic contrast between the horizontal line of the sweeping water in front of the land and the vertical lines formed by the pine trees stretching to the sky.

First of all, we drew the land on the paper. Sketching the land is to understand the characteristics of the land. We draw the land, landscape, trees and grass, sunshine and shadow, and through these activities we discover the ‘line’ which forms the foundation of the house.

The client explained his life and preferences. He wanted an open space for the kitchen and dining room for visitors, and an extra guestroom. And he wanted to listen to the music undisrupted in his separate music saloon.

We seated his requirements following the grain of land as we understood. We began with horizontal lines parallel to the boundary and joined the spaces on the line with diverse functions.

First, we drew a long corridor parallel to the road and water, and attached each space; the kitchen and living room, bedroom for family and guests, and an annex for the music room. Between each room, we inserted an outdoor space (Madang).

Following the flow of the land, the overall form is slightly bent according to the shape along the road. To avoid emotionless long wall, we made several openings for visual connection and to let wind pass.

On the wall of Buonarroti Michelangelo’s atelier, there was a phrase “Nulla dies sine linea.” To translate the Latin, it means, “Do not spend a day without drawing a line.” Maybe he wanted to emphasis the fundamental virtue of an artist.

To draw a line means to draw a sketch, and this would be an expression of the artist to continually practice the basics constantly. Architects draw countless lines as well.

In architecture, lines have to be responsible. Architectural lines are not just traces on the paper. They represent the relationship between spaces. It should not be too close or too far. It should be regular and very objective.

Like rambling fruits on the branch, this building has consecutive masses and several gardens between each space, making the building longer than it is. This horizontally stretched form creates a harmony with a vertical line of pine trees to confirm the will of the line we first drew on the land. So we named this house ‘The house of lines (casa linea)’.