Save
Why Are Alexander Calder Sculptures So Overused in Architecture Renders?
Share
Or
Copy

This article was originally published by The Architect's Newspaper as "Rendering LOL: How architects are absurdly using Calder sculptures."

Why do so many architects use Alexander Calder sculptures in their renderings, even when the works have nothing to do with the institution or project depicted? The Calder Foundation has been tracking this phenomenon, and the results are featured in the images for this article.

A new exhibition at the Whitney Museum in New York explores mobiles—kinetic sculptures in which carefully balanced components reveal their own unique systems of movement—created by American sculptor Alexander Calder from 1930 until 1968, eight years before his death.

Running through October 23, the exhibition features almost 40 sculptures, including three that served as models for possible architectural commissions. In addition, Alexander S C Rower, who is the sculptor’s grandson and head of the Calder Foundation, will bring one of three motorized maquettes Calder created as proposals for the 1939 New York World’s Fair to the Whitney later this summer for a temporary viewing and activation.

Other Calder works on display that were designed for architectural projects include Octopus and The Helices, both made in 1944 as part of a series of bronze works Calder envisioned as 40-foot monuments and created for an International Style architectural project proposed by Wallace K Harrison.

Interestingly, more recently, many well-established architects have used Calder’s works to illustrate renderings of their own designs, often without the Calder Foundation’s permission.

OMA in particular apparently finds Calder’s sculptures perfect for its projects: It used his 1973 Crinkly with a Red Disc, actually in the collection of the Kunstmuseum Stuttgart, in Germany, in its rendering of the Garage Center for Contemporary Culture in Moscow. The rendering for the firm’s Park Grove condos in Miami pilfered Calder’s 1973 Flamingo, which actually sits in Federal Plaza in Chicago, while the rendering for 11th Street Bridge Park in Washington, DC, by OMA and OLIN, features the same sculpture.

Calder’s works reside today in some major venues: In addition to the sculptures in Federal Plaza in Chicago and at the Seattle Art Museum, the home of his Five Swords is Storm King Art Center in New Windsor, NY.

Asked about contemporary architects’ practice of borrowing—to put it politely—images of Calder’s works to illustrate their designs, Rower said that during the artist’s lifetime, Calder was friendly with Mies van der Rohe, Josep Lluís Sert, Le Corbusier, Marcel Breuer and Wallace K Harrison, and “frenemies” with Frank Lloyd Wright. As the first artist commissioned to make a public sculpture by the General Services Administration, he said Calder was “the obvious go-to for architects designing new buildings or plazas. Given this history, it comes as no surprise to me that, even today, he is the most prolific artist depicted in architectural renderings. His iconic vocabulary is instantly recognizable; thus, contemporary architects use his imagery to suggest the superior qualities of their projects.”

“The genius of Calder’s work,” Rower added, “is that it transforms space—and our experience of it—in real time. While his great invention, the mobile, does this in an overt way—performing in front of us and literally embodying movement—Calder’s stabiles (stationary sculptures) imply movement and affect how we encounter surrounding plazas, facades or even natural landscapes. Architects intuitively understand that effect, and are excited by the prospect of how a Calder sculpture can deepen the experience of whatever space they are designing.”

“As long as it’s done in a respectful way,” Rower admitted that rendering actual Calder works that have not been manipulated “is gratifying. I’m interested in Calder’s works in architectural mock-ups—allowing me to imagine his sculptures in many different settings and contexts. And it’s rewarding that Calder remains a favorite amongst architects.” 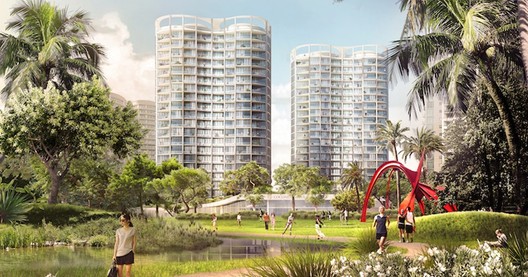