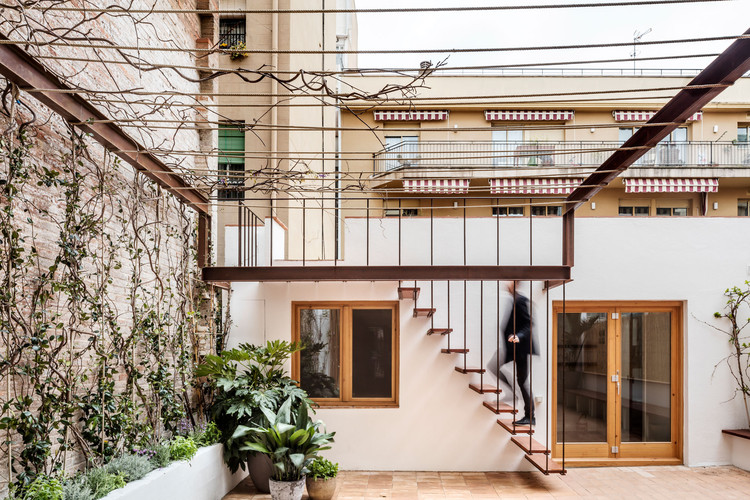 Text description provided by the architects. This early XX century patio-apartment presents the opportunity to reformulate the dwelling's conditions, adapted to Mediterranean climate, in the urban density of Gracia’s district.

Beyond solving the housing scheme for a young couple with two daughters the project aims to understand the house as a gallery that connects the street with the inner courtyards enhancing comfort situations in the intermediate spaces as living thresholds.

The needs of the owners allow to enhance the advantages of a productive dwelling by combining a domestic program with a music studio that will replace the old storage room located at the back of the plot. The patio then becomes another inhabited interval of the house.

The original dwelling was fragmented into small rooms connected through dark corridors slightly connected with the outside. The potential of the existing space was hidden behind the consequences of several interventions. The new housing system modifies the current distribution and affects the main structure of the apartment.

The first operation consists in erasing the envelope by stripping the ceilings, walls and floors. The rooms were paved with a hydraulic mosaic in a good state, even though the floor had given way due to the pass of time. A selective demolition is carried out reusing 90% of the 918 hydraulic tiles and the old bricks coming from the partitions, which will be relocated in the facades. The tiles will be replaced in strips of the same type in the circulation areas, kitchen, bathroom and dressing room, extending the life of the preexisting pavement as material heritage of the house. The satin finish of the mosaic offers a bright spot in the most interior areas of the house.

The second intervention proposes a main space based on the succession of different rooms connected by porticos defined by structural interventions in the load walls. With this intervention the visual depth of the house is enhanced and different circulations are granted. From all rooms the inhabitants can enjoy views of the street and the inner courtyard so the boundaries between the domestic and exterior spaces are broken.

Once the structural interventions are done the Interior spaces are redistributed trough light elements that will allow future modifications.

The resulting 3 rooms are interconnected with the insertion of a wooden structure that works as a distribution and storage space. This light construction generates a shared space for the 3 rooms so they don’t need to include storage furniture. This strategy provides a great flexibity to all rooms that can accept exchangeble programs.

In the courtyard a structure made of steel profiles and ropes is introduced in order to make a seasonal porch that improves the climate conditions and allows the use of the patio during the hotter months. To this structure we weld round 14 mm steel profiles that serve as the support for a wooden board stairway that allows access to the studio’s roof, where an urban garden and a solarium are planned.

Passive climate strategies are enhanced by understanding that most of the year’s domestic life will occur in the yard or in the intermediate thresholds. In this sense we optimize the interior-exterior relationship, create shade in summer and use a carpentry system that allows the maximum openings in order to inhabit an intermediate gallery.

The patios offer great conditions of thermal regulation, natural lighting and biological exchange. The extension of the small courtyard in the center of the house and the sequence of porches offers a cross ventilation that help to cool the apartment in the hottest months.

The bricks coming from the demolition of the existing partitions are reused as double façade​​, improving thermal inertia and acoustic insulation. The accumulated rainwater of the cover of the annex will be used to irrigate the planter that will cause, in a few years, a vegetal pergola, mixing wisteria with vine and jasmine. 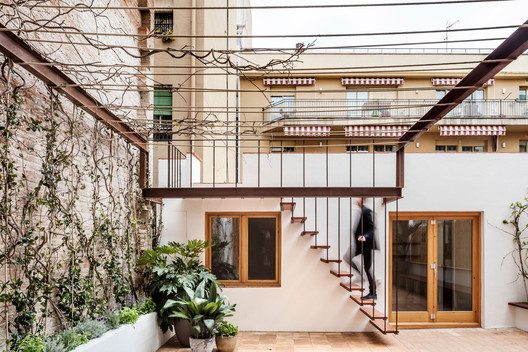