Save
Transformation of a Townhouse / Wuelser Bechtel Architekten 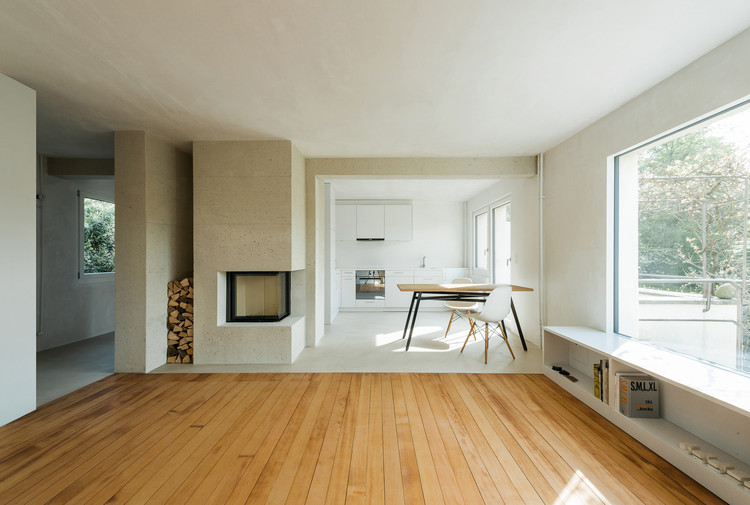 Ground floor – sculpture and collage
An expressive concrete sculpture standing in the middle of the groundfloor and expanding to different extents in different directions. It might surprise at firt glance by its sheer mass and geometrical complexity, but it supports the wooden ceiling, carries the loads of the upper storey, creates a fireplace and storage for firewood, zones the space in functionally and atmospherically different areas and characterizes the space with it’s materiality. With it’s mass it, above all, adds centre and weight to the house. The proportions and expressive shape are both, structural element but also sculpture. This shifts the perception of the new openness from a structural effort to a familiar side by side of elements.

In order to cast the new concrete structure in a tiny house, the formwork and the pouring of the concrete had to be minutely planned. On the ground floor, besides the extensive formwork, there was only a very small passage for accessibility and the important vibration of concrete. On the upper storey, existing floors had to be temporarily opened so that the concrete could be evenly distributed in all the arms and parts of the sculpture. A rather tough mixture of white cement and broken, local limestone was sandblasted directly after the stripping , in order to reveal the typical air inclusions and to give the material more depth. It perfectly blends in the interplay of existing unsealed surfaces and materials and links to the open-pored haptic qualities of the 1929 house. The velvety and rather rough conrete body, the new oiled cement spatula floor and the uncoated lime-cement plaster meet the right tone for a self-assured but calm interpretation of the space.

The existing wooden floor was cut up rather inconspiciously and reassembled in it’s geometry to a new whole. Parts of the waste were reused to restore the had-to- be-destroyed area under the concrete framework in front of the chimney. Thus, the floor is today a simplified, carpet-like element between entrance, concrete sculpture and garden facade. On the garden facade is the only externally visible intervention of the conversion. The parapet height of the living room window has been carefully adjusted. The old window sill was removed from the wall and walled at a lower height again. The relief of the side gowns were reproduced using simple wooden framework and concrete casting again.

First floor – renewal and materiality
The existing chamber structure remains intact on the first floor. Accordingly, the slag panels on the ceiling were carefully refreshed and preserves. The floors were uncovered and grinded and oiled. The new lime-cement plaster surfaces fit in with their lively and open-pored texture between the existing woodwork of doors, window frames and ceiling edge strips. The high quality of surfaces compared to todays regular synthetic materials of system-suppliers, are a real pleasure. Thus, the subtleties of light and the depth and haptics of all used materials, old and new, makes us perceive the ordinary as a quality for everyday life.

Top floor – the caravan
The top floor, originally designed as an unheated screed, was given a new roof with two dormer windows in 1998. Only these made the low roof space with sill walls of only 30cm usuable as a living space. The resulting areas had a room height of 2.30m in the middle and is exposed to daylight. The proportions of the room, however, remained unfavorable, and the niches and remaining areas beside the dormer windows were still impossible to be furnished. Also neither the windows nor the paneled roof could give the space a pleasing atmosphere. The only identity-creating elements to be found here are the fir floor and the oblique standing chimeny. We added two new, 85cm deep room layers on the short sides of the storey. They regulate the overall proportions and make the appearence of the space much more calm. As in a caravan, the walls become roomy and functional. The first layer includes the steep staircase as well as a spacious warderobe and a hat compartement.

Opposite, the wall contains a shower with a toilet and a lavabo as well as the new distribution of all technical installations. On the street side, a deep sideboard pushes the edge of the room further towards the gable. So the lowest walkable area of the room measures 1.50m and makes it possible to properly furniture a bed. The existing paneling, the window frames, the chimney and all new surfaces are painted in a silky white tone.  This, in combination with the lively fir floor, leads to a certain calmess for the small room with many angles and edges and emphasizes the view into the properties beautiful garden.