Earlier this month, the Norman Foster Foundation opened its doors in central Madrid. Inhabiting in an old residential palace, and having undergone extensive renovation works since, the Foundation have also constructed their own contemporary courtyard pavilion. Housing a treasure trove of artefacts from Lord Foster's personal collection, the structure—which is shaped like the wing of an aircraft—also exhibits a newly restored 1927 Avions Voisin C7 originally owned by Le Corbusier.

The pavilion—the design of which was led by Lord Foster, David Delgado, Raúl Gómez and Jorge López—is tucked between the palace and an adjacent neighbour. With a portion of the façade (a wide glass door weighing 2.7 tons and measuring 6 metres in length) opening onto a sun-drenched, shaded courtyard, the intention is that this pavilion—alongside its primary function as an exhibition space—will also host talks, discussion groups, and events.

By collaborating closely with (primarily) Spanish craftspeople in metal and glass, the design team have been able to develop a combination of slim, beat-blasted stainless steel sections welded together and mirror-polished edges that "dematerialize the bulk of supporting structures."

The new building resolves the irregular geometry of the outdoor area with a roof shaped like the wing of an aircraft. This is supported by a hidden steel structure cantilevered over a structural glass façade without any visible means of support so the roof seems to float over it.

The result is an architecture that seeks the ephemeral qualities of light, lightness and reflections. Elements are reduced to an essential minimum with a mirrored ceiling and fascia that further dissolves the volume of space to emphasise its contents.

The pavilion is filled with an "eclectic selection" of objects, models, photography and sculpture from the worlds of art, architecture and design. These include a range of Lord Foster's formative inspirations: aircraft, cars, and locomotives. The display also acknowledges the importance of other architects, engineers and mentors from the past and present that have influenced Foster's practice.

The Avions Voisin C7 was advanced for its time, employing aviation technology pioneered by Voisin for his flying machines. Because of its large expanse of glass, echoed in the new architecture of its age, it was called the Lumineuse. Gabriel Voisin was also a patron of Le Corbusier, who named his radical proposal for Paris The Voisin Plan.

Last month the Norman Foster Foundation, created to promote "interdisciplinary thinking and research to help up-and-coming architects, designers and urbanists to anticipate the future," coincided the opening of its new Madrid-based headquarters with an international conference. 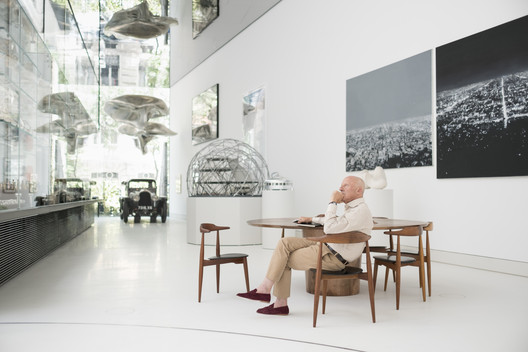