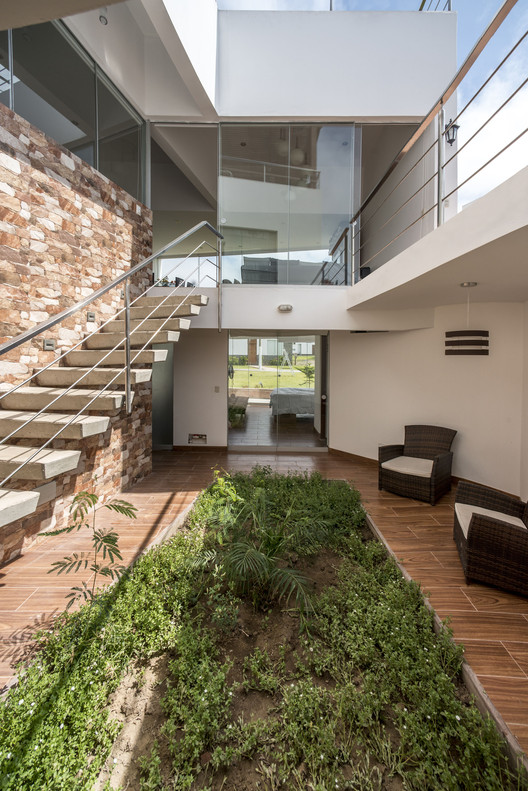 Text description provided by the architects. The place is a condominium of beach houses 90 km at south of Lima, formed by "twin" lots arranged on an esplanade at the edge of the sea. Due to the double lots, each one has three free fronts and a blind one that is the party wall.

The house is articulated by the outside circulation (staircase) and a central patio-garden. The starcaise unfolds as an ascending envelope along the three free fronts, is not only conceived as a vertical connection element, but also as a path that generates horizontal relations between spaces.

The essence of the project lies in the experimentation with the path and the spatial limits. The path is the protagonist, integrates with the boundaries-edges generating continuity relations with directions and trajectories. The trajectory proposes the transition between the circulation-preamble, the entrance-threshold and the space-room as fluid as possible, almost ethereal. The house is not a sum of rooms, but a single room that is transformed as you travel. This transformation or transition from circulation spaces to room spaces and vice versa is determined by vertical and horizontal planes whose directions integrate an analysis of visuals, spatial sensations, container boundaries, function and aesthetics.

The programmatic requirements were demanding (as many rooms as possible) and, at first, a grid was created that maximized the use of space, calculating the greater number of rooms. This analysis permitted to have a reference, with the objective that the final design does not have deficit of rooms with respect to the maximum capacity that the land could offer.

Due to the elongated geometry of the lot, a central opening was placed, the garden patio, which organizes the rooms around and addresses the optimal technical requirements of comfort, such as adequate natural lighting and the possibility of having cross ventilation in all rooms. In the first floor are located the bedrooms, in the second the social area and in the third the barbecue area and pool.