Save
Houses in Arrayán / Espiral 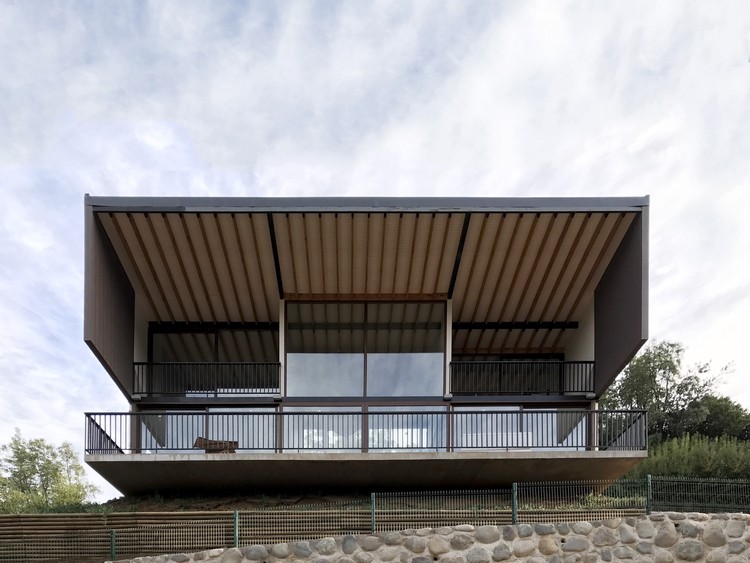 Text description provided by the architects. The project consisted in designing two incremental, Mediterranean and identical houses of 140m2 on a big slope inside the mountains of Santiago de Chile, in the El Arrayán ravine.

These two houses are designed for a family, compose by an uncle and his nephew, but the project was planned to leave open the possibility to receive other inhabitants outside the family in the case that any house could be sold or rent.

On the other hand the place has a great view to the south, to the ravine of the Arrayán, while to the north, at the top of the site, passes the channel La Poza, where the owners wants to protect themselves visually for safety.

Initially the program was defined by the clients: two bedrooms, one living room and another one integrated to the kitchen and a large dressing room near the main bathroom inside the master bedroom.

Whit this, the design was thought as a generic but adaptable model, designed from the inner spaces, ensuring the possibility of future modifications and adaptations. After conceiving the habitable space inside the dwell we develop the expression of the house as a complement to the inner common spaces and the exterior public spaces. The project was thought as a place where the life will develop in the common spaces, where all the enclosures, at both levels, converge towards the center of the dwelling around a great atrium in two heights connected to the exterior through a large window and a terrace projected toward the ravine.

The project define open, flexible, mutable and interrelated spaces between the two levels of the house through different ways of spacing the internal volumetric. It is projected a solid and airtight first level by the concrete and a light and warm second level of wood and strategic windows for incorporates radiation to the large central atrium. These two systems are linked through the atrium in two heights, by the ladder as a central element that acts as a screen between interior and exterior and between circulation and living spaces. The first level projects its walls to the north, configuring the parking lots and containing the hill with the objective of propitiating future extensions over the parking structure for the second floor, and inside of the parking space in the first level for another new enclosure. Each house has in the first level an access hall, living room, kitchen, loggia, guest bathroom and a terrace, the master bedroom with an incorporated bathroom and a walk-in closet. The second level has the second bedroom and a living room convertible to a hypothetical third bedroom facing the living room with another bathroom. On the circulation bridge we develop a large bookcase on the window.