This article was originally published on Autodesk's Redshift publication as "Augmented Reality in Construction Lets You See Through Walls."

Imagine you’re part of a crew constructing a new office building: Midway through the process, you’re on-site, inspecting the installation of HVAC systems. You put on a funny-looking construction helmet and step out of the service elevator. As you look up, there’s a drop ceiling being installed, but you want to know what’s going on behind it.

Through the visor on your helmet, you pull up the Building Information Model (BIM), which is instantly projected across your field of vision. There are heating ducts, water pipes, and electrical boxes, moving and shifting with your point of view as you walk along the corridors. Peel back layers of the model to see the building’s steel structure, insulation, and material finishes. It’s like having comic book-style X-ray vision—and soon, it could be a reality on a construction site near you.

This magic hat, the DAQRI Smart Helmet, is a wearable augmented-reality system being developed for use in industrial fabrication industries—especially the building and construction industry. Essentially, it allows builders, engineers, and designers to take their BIM model to the construction site, wear it on their heads, and experience it as an immersive, full-scale 3D environment.

Giving construction crews access to this level of multilayered building information would let them see spatial relationships better; detect MEP clashes earlier; and in general, allow faster, more informed decisions with fewer errors. “It empowers you to make decisions in the field, as opposed to waiting till the end of your shift to check with your supervisor,” says Roy Ashok, DAQRI’s chief product officer. “It empowers the end construction worker.”

The helmets (which cost $15,000 each in this early development phase) are just starting to trickle onto construction sites as DAQRI begins short trial runs, including a collaboration with Mortenson Construction and Autodesk. As part of a proof-of-concept test, Mortenson used the helmets during construction of the Hennepin County Medical Center in Minneapolis.

“The BIM model is step one,” says Mortenson’s Senior Director of Project Solutions Ricardo Khan. “The reality is that the value of the model is probably 25 percent of the real value. The next 75 percent is connecting the field teams to the rest of the contractual project information in the space.”

The track record for augmented-reality wearables is marred by one notorious flop—but unlike Google Glass, DAQRI is focused squarely on industrial applications. In this arena, slightly goofy headwear like these helmets are readily accepted, and fewer privacy concerns apply.

In terms of hardware, the helmets have three different types of cameras that work together to locate users at a specific point in space and interpret the geometry around them. There’s a 166-degree, wide-angle grayscale lens that defines the user’s position in an environment, accurate to one centimeter.

Then there’s a depth-sensing camera (the Intel RealSense) that deciphers the geometry of the space and the objects within it, telling you, “this is a door, this is a window, this is a table,” Ashok says. This awareness allows you to place virtual content and alter a model. It also remembers a “map” of each room that’s created. “It’s almost like a cartography function,” Ashok says. A third, thermal, camera also allows users to map temperature readings onto objects rendered in 3D.

“With the combination of where you are with the visual odometry system and what is around you, you know pretty much everything you need to know about the world,” he says.

The DAQRI helmet’s software design was driven by functional concerns for the unique and relatively dangerous environment of a building zone. An initial idea was to use hand signals, which would be picked up by the helmet’s camera, to wade through its menus—but that didn’t work.

“There are two big reasons,” Ashok says. “One is reliability. The technology is just not mature enough have 99.99 percent reliability, and because of that, it leads to fatigue.” A construction site is also a bad place to be wildly flapping your arms to highlight an array of lighting fixtures that haven’t been built yet: Hence the second concern about using hand signals.

Due to the showers of sparks, spinning blades, exposed wiring, and tons of metal swinging though the air on construction sites, you want everyone’s full attention on the task at hand and the actual physical surroundings. “Once you pull your awareness away from what’s happening around you, it exposes us to potential hazards on the job,” Khan says.

To address these concerns, the DAQRI team decided the helmets would have to operate completely hands-free, and the engineers settled on what they call a “gaze and dwell system.” A reticule oriented in your field of vision moves as you move your head, “just like a mouse and cursor,” Ashok says. If you hover over a menu item, hyperlink, or model layer for a few seconds, it’s selected. The helmets come with Autodesk BIM 360 out of the box, but it’s mostly up to each company to create its own custom software (which DAQRI supports), because the product’s range of uses is so broad.

Using DAQRI helmets during a project’s construction phase seems like the most intuitive application, but Ashok says it’s worth bringing to a building site on “day one of design” as well. An architect could show his or her model to engineers and builders on-site before construction begins, and they can point out potential issues—when mistakes are far easier and cheaper to fix. The system’s clear visual interface means it could also provide construction crews with step-by-step instructions for punch-list inspections or even for maintenance long after construction is complete.

“AR has far-reaching impacts on how society will interact with information in context to the environment,” Khan says. “For the construction industry, we see it as a needed disrupter to resolve a wide range of business problems, such as increasing safety awareness for the field crew related to just-in-time knowledge. As a downstream value, our customers can leverage AR to dramatically improve operating and maintaining their facility.”

The current incarnation of DAQRI promises to change the way buildings are made, but it still relies on importing a static virtual model of a building and overlaying it with the real thing. The next frontier will be creating a device that can detect components hidden from view and then represent them dynamically to users—whether they are included in the model or not. That truly would bring augmented reality to the cusp of X-ray vision, and the construction industry into a world of in-the-moment material omniscience. 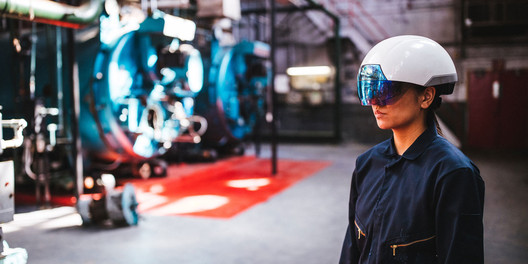