Rome-based firm Schiattarella Associati have unveiled the design of a new community mosque complex in the city of Ha’il in Saudi Arabia, using traditional cultural elements of Najd architecture to create a new landmark in the area. The 22,500 square meter Al Jabri Mosque accommodates 3000 people and focuses on “the principle of a people-oriented city and proposes it back again using a contemporary language respectful and attentive in the use of shapes and materials.” 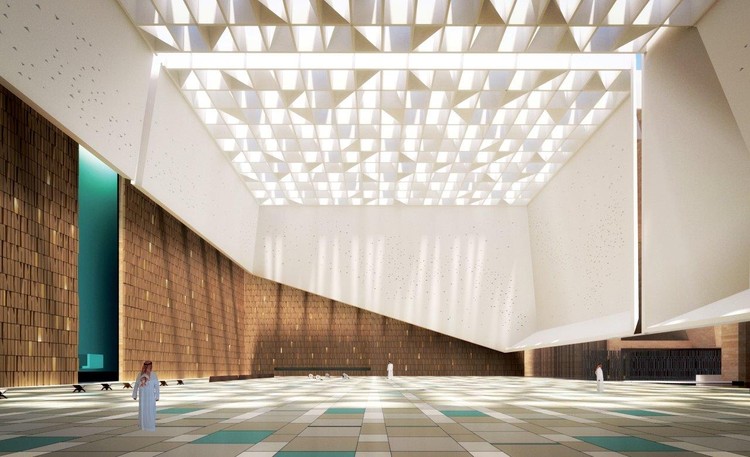 A large central square forms a focal point of the complex, serving as the primary social space and is accessed via a number of covered corridors and shaded courtyards. Surrounding this are numerous commercial amenities, including restaurants and cafes on the ground level, with libraries, offices and a Quran school above. Sports facilities are also implemented to engage the local youth.

Creating the main mosque was naturally the primary aim of the project. The massing achieves an illusionary presence of floating on water, and the diagonal cut in the stone façade indicates the threshold between interior and exterior, the public and the sacred. Inside, the intentional spacing between walls allows for the spread of natural light throughout the prayer space, bouncing and reflecting off surfaces.

The result is a space where light dominates underlining its sacredness and at the same time fosters meditation and prayer fully respecting local tradition and culture.

This path of lighting is reversed at sunset when the building is illuminated as a landmark with the use of artificial lights. With diffused and indirect light penetrating the interior prayer hall, the levels of luminous intensity increase towards the mihrab, a niche in the wall from which the prayer is led and an indicator of the direction of Makkah.

Rome-based Schiattarella Associati has unveiled its designs for the King Fahd International Stadium, a refurbishment project that will modify the existing structure, located in Riyadh, Saudi Arabia, to accommodate almost 50,000 spectators. In order to link the ground level with the concourse level of the structure, the design focuses on creating an artificial hill at the base of the stadium.

AL_A has won a competition to design a new mosque within the Foster + Partner-designed World Trade Center complex in Abu Dhabi. The 2000-square-meter project, envisioned as a "pathway to serenity" rather than a single building, leads visitors on a journey through an informal park of palm trees that slowly align with the mosque's shifted grid as users approach the Prayer Hall. 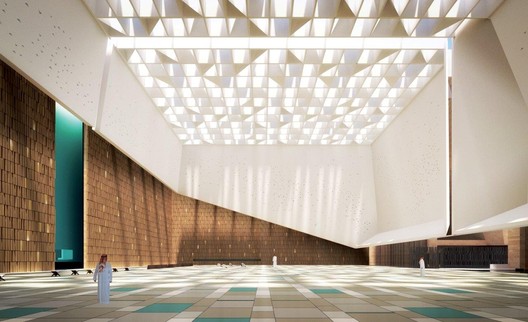