As the boundary that separates work and leisure in the 21st Century continues to be blurred by technology, architects Christoph Hesse and Neeraj Bhatia sought out to uncover a tranquil solution. The pair are co-curating an upcoming exhibition at the Kulturbahnhof Kassel in Germany as part of Experimenta Urbana in a show called “Ways of Life,” which opens July 5th.

This international initiative seeks to discover “a new nomaticism.” A gathering of 19 emerging architecture offices each presents a dwelling encompassed in nature. These buildings are often equal parts project and manifesto. The show’s overarching theme is the delicate balance of naturally induced relaxation and programmatically encouraged productivity. Each firm must additionally consider constraints that include limited square footage, integration of rapidly advancing information technology, and a strictly sustainable design.

In the search for precedent, it’s difficult to avoid comparison to the midcentury Case Study Houses. The Arts & Architecture Magazine-sponsored endeavor that spanned from 1945 until 1966 had a completely different programmatic goal but a similar premise. The magazine reached out to a number of burgeoning international architecture firms to design inexpensive housing that would serve as archetypes in addressing the American residential boom following the second World War.

The program birthed a wide array of midcentury modernist masterpieces and solidified the legacies of none other than Richard Neutra, Charles and Ray Eames, Eero Saarinen, and Pierre Koenig. Nearly all of the Case Study Houses were strung across the foothills of the Santa Monica Mountains—a chaparral-covered Southern Californian mountain range that comprises the northern border of the Los Angeles basin.

Mirroring the Case Study approach, the Ways of Life dwellings all negotiate consistent topography. Each of the firms placed their projects in immediate proximity to Lake Edersee—aUNESCO-protected natural site in central Germany. These projects aren’t merely theoretical. After the exhibition this summer, a number of the designs will be slated for construction. Below, ArchDaily presents all 19 projects featured in Experimenta Urbana’s "Ways of Life" exhibition.

This two-story dwelling is energy independent due to the inclusion of a 19th-century style windmill and photovoltaic solar panels. The timber, limestone, mud, and plaster structure is locally sourced. The project houses a workshop on the ground floor, and a dense living area on the second. Stacked cantilevered beds and a gardening area ensure a self-reliant household.

This elliptical retreat creates 360-degree views of the picturesque German landscape. A double glass skin informs circulation channels that funnel inhabitants between rooms. The second story is accessible via spiral staircase and contains the master bedroom and observation deck. An extensive use of adjustable semi-transparent shades keeps ideal lighting conditions in the space.

Placed the in the middle of a field over 50 meters away from the edge of Lake Edersee, Boris Bernaskoni’s narrow matte black dwelling almost resembles the black monolith in Stanley Kubrick’s 2001: A Space Odyssey. Each element of program is separated by story. As the trapezoidal structure tapers, the use of the building’s interior simplifies from kitchen, to bedroom, to contemplative space.

A partially subterranean structure, this concrete dwelling possesses exceptional lighting conditions and framed views. The ground floor features an open plan that provides shade and breeze during hot humid summers. The inclusion of a rooftop pond allows vines and foliage to drape down and intermingle with the concrete facades over time. A generous use of skylights preserve the connection to the building’s surroundings.

The One-Room House is designed to represent the bare minimum amount of material that’s necessary to create a habitable structure. A boxy wooden four-meter wide partition-free “pergola” is somewhat reminiscent of a Southern “shotgun” house as it can be looked through from one end of the building. Embedded in the Northern, windowless side of the plan are the building’s storage closets and bathrooms.

This minimalistic dwelling is designed to be built for under €5,000. The ultra-simple project is partitioned by prefabricated wooden panels informed by its double pitched roof. Seen by its creators as an “existentialist hut in the black forest” the modest structure aims to emulate the “pragmatic hedonism” achieved by the Case Study Houses in a “temporary magic box.”

A project driven by its section, Segments is a horizontally stacked series of shifting concrete ribs finished in timber. The dwelling supports 5 residents over two stories in a modest 90 square meters. Much of the seating and desk space of the space is integrated and formed from its structure. As the structure is longitudinally transparent, inhabitants always have a view of the outside world.

This hyper-transparent shelter uses actual grass in lieu of carpeting. The project consists of a series of steel columns and an undulating roof structure. The roof’s steel grid is filled with “intelligent glass,” which can automatically adjust to a change of light. The structure filters through a specific level of sunlight, which prevents the house from overheating during the summer. The more private programmatic elements such a bathrooms fold out of large rectilinear boxes located on either end of the structure.

From Roots To Crowns / NOA

This radical “hybrid building” is height adjustable. A hydraulic column holds up a living pod equipped with a garage, kitchen, and bedroom and is covered in vegetation. Depending on the inhabitant’s preference, the height of the structure can be adjusted to three preset levels: under the Earth, on the fields, and in the tree crowns. This variably adjustable structure is able to submerge and disappear into a pool of water that surrounds the site.

The Esuoh House is comprised of six robust concrete triangle members that collide to form the upper form of the structure. A ground floor of stiffened vierendeel wooden beams supports the concrete cap. The dwelling is seen as a temporary space not for visiting in, but “camping.” The wooden frame gives way to large square glass windows that provide an unobstructed view of the surrounding environment. At night, inhabitants retire to the privacy of a mezzanine level embedded within the concrete of the cap.

The Yin + Yang House intends to return the same amount of land taken away from nature by the house’s footprint back to the environment though a terraced roofing garden. The residents have access to this green space most of the year, and an interior greenhouse during the white winter months. The house includes a rooftop dining area, and a garage on its rear.

This three-story concrete dwelling is a statement in opacity. The structure is tied together by a centralized spiral staircase that contains a vertical succession of chambers. As inhabitants ascend, the privacy level of the space increases. The building’s second level contains four cantilevering balconies that extend the square footage of the kitchen and gathering areas during warmer months.

This four-story residence is inspired by a bookshelf—the section of the structure reveals platforms at various levels that eliminate the horizontal partition between floors, opening up the space. The mixed use of spiraling and traditional staircases give the building a branch-like circulation pattern. The building is intended to be placed in a dense, forested area of the site. Like the canopy of a tree, light filters through semi-transparent slits that remind residents of nature’s proximity.

The Perched House is work/study oriented dwelling. A bar separates the two wings of the house. One wing is a garden oriented office space that faces the street. The second wing accommodates a kitchen and fireplace. The house is supported by a combination of steel columns and concrete walls. The entire residence is surrounded by a porous envelope that contains a winter garden, allowing the space to remain green the entire year.

Life Within The Wall / SsD Architecture

SsD’s translucent residence seeks to drastically reduce a building’s literal footprint. Up to 10% of a traditional structure is occupied by walls and dead space. By delaminating each individual layer of a wall and window assembly, SsD were able to create new spatial conditions. The building is an exercise in translucent shades, fly screens, cladding, double glazing, framing, internal linings, curtains and blinds. Combined with a skylight, these lightweight partitioning elements create an ideal condition of indirect light and flexible space.

Sharing the same moniker as the Henry David Thoreau retreat, Walden is a dwelling intended to leave no mark on the field it occupies. The entire structure is gently lifted above the grass, with its upper glassy stories pointed towards the surrounding trees. The two-story house is finished in two different types of wood. The entire interior is untreated oak, while the exterior is clad in cedar paneling that will turn silver-grey with time.

This project is the addition of six unique dwelling spaces. Each of these areas has spatial qualities that reflect the programmatic purpose of the room. Each volume is arranged in a tapering spiral—the more public spaces are towards the ground, while the private quarters top off the structure. The cantilevered rooms create shaded communal gathering areas and gardens.

Depth of Fields / The Open Workshop

Depth of Fields is a simple distinction between the natural and artificial world through the outline of a circle. While the building itself has a small visual impact on its in environment from its exterior, residents looking outwards are completely surrounded by nature in every direction. The space is programmatically divided by an axis containing a curving triangular plan. Cuts in these intersecting walls create dramatic moments and views through the space.

This semi-sunken structure is divided into eight staggered rooms that circle a semi-covered courtyard known as a “biotope.” Apart from the structure’s concrete slab foundation, the building is nearly entirely constructed from rammed earth. The dwelling is sunken a couple feet into the ground in order to minimize its visual impact on the environment. Yamazaki Kentaro sees it as “a proposal to enable us to mature our good image.” 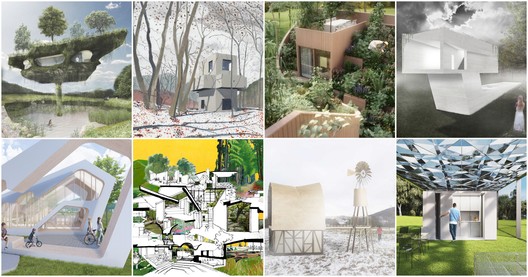