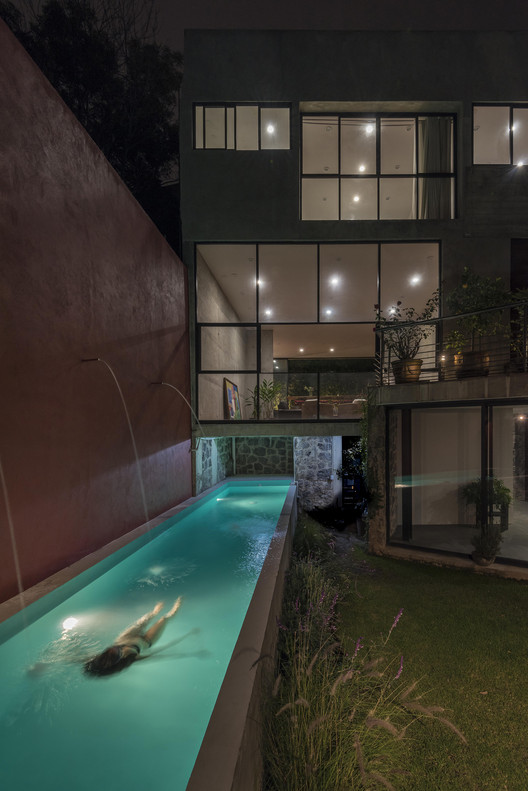 "The tectonic is used as the main element of design, the structure and materials speak for themselves to show their nature and purity, structure is the essence of ornamentation, beauty is in the truth of unpolished materials’’.

Casa Risco was projected in the Pedregal de San Ángel, south of Mexico City. This residential area designed by Luis Barragán, one of the most outstanding architects and artists who were involved in this project in the 50’s, the project combined Mexican regionalism with architectural functionalist architecture.

Like the first houses in this area Casa Risco respects the site tectonic and use it as one of the main design elements. The stone that was rescued from the excavation was reused in the foundations and apparent walls. The natural stone beautifies the interior, as it was part of the natural phenomenon that suffered this area of ​​Mexico City (the eruption of the volcano Xitle). This is why it was decided that the structure was undressed and mimicked with finishes and materials that were preserved in their natural state, allowing them to speak for themselves.

With the purpose of giving back to the structure its beauty by the simple fact of its function, as the bearer element, the structure can be read from the interior as a piece of art and ornamentation. Therefore it plays two roles, as structural architectural element and as piece of art. The apparent concrete structural wall tells the story of the construction process; in this way it becomes a piece of conceptual art. The room is the meeting point of people, where thoughts and ideologies are exchanged; the marble wall that lies parallel plays the role of metaphor, in which a blank canvas awaits users embody their ideas.

Casa Risco strengthens human activities, since each room refers to a particular activity; in contrast it seeks amplitude and continuity when playing with different spatial and visual planes. The living room and the dining room, both maintain a vision of the continuity that allows to see the gardens from any point of these areas to create a feeling of amplitude. The garden is integrated in both the dining room and kitchen, through the use of retractable glass windows, allowing the green to integrate as part of both spaces, creating a connection between the interior and exterior.

The façade is the reaction to the needs of light, shade and regulation of the thermal sensation of each interior space of the house. For example in the bedrooms the remittance of the window provides shade; also the height decreases in comparison to the ground floor to providing greater thermal comfort. It is possible to read all the different heights used in the house on the façade of the stairs. Therefore the façade works as a diagram of the internal functions of the house.

Originally the site had a natural slope of three meters height, this allows to provide intimacy to a spa area inside the house, where a gym, sauna, cava, lap pool and garden creates a small oasis in the City. In the same way the beauty of the natural terrain was kept leaving the volcanic stone exposed to the interior.