Save
Power to the Bower: A Bird’s Architectural Method of Seduction
Share
Or
Copy

Think your decked-out bachelor pad is the slickest on the block? Think again. That reputation now resides in the carefully constructed abode of the bowerbird, which transforms the art of building into the art of seduction. Native to Australia and New Guinea, the bowerbird dedicates months to construct elaborate woven nests, known as bowers, as a means of attracting mates in one of nature’s most unique courting rituals.

Reaching spans of up to half a meter, the bowers are thatched structures of grass and twigs, some conical in nature and lined with moss. The bowerbirds then embellish these with a variety of colourful objects, including flower petals, bottle caps, charcoal, and berries. Different birds have individual colour preferences, with some opting for vibrancy and others relying on the cool and subtle to attract the eye of prospective mates. Interestingly enough, a plainer bowerbird will create a more complex bower, while those with brighter plumage will generally opt for simpler structures.

Complimenting by the bowerbirds’ impressive mimicking and tonal ranges, the bowers are inspected by females, lured into the structures depending on the colours present and the arrangement of the bower’s components. Facing stiff competition, the male birds also prepare mating dances for the females to witness, as they hop around the constructions. An accomplished bower will often result in a successful mating ritual.

Given the uniqueness of these mating behaviors, studies have been conducted to investigate these seductive tendencies. An article published by The Guardian describes one study in particular, which investigates the illusionary tunnels of Male Great bowerbirds. This species creates tunnels that open into a central court, littered with bones and other appealing objects that somehow increase in size as the distance from the bowers increases. In this manner, female bowerbirds view the objects as the same size, thus magnifying the true size of the male in a perspective trick.

Story via BBC and The Guardian. 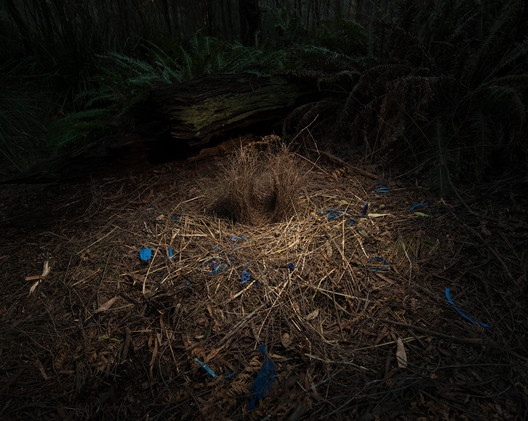