OMA New York has revealed renderings for it latest project, a 490,000-square-foot mixed-used retail and office development located at 88 Seaport Boulevard in the emerging Boston Seaport neighborhood. Being developed by Massachusetts-based property developer WS Development, the structure adds to a growing collection of quality architecture commissioned for the district, including projects by James Corner Field Operations, Sasaki, and NADAAA.

"We are committed to bringing world-class architecture to Boston’s Seaport – architecture that will stand the test of time. Together with the brilliant team at OMA, we will create a unique urban environment that advances Boston’s innovation economy and celebrates great urban design,” said Yanni Tsipis, Senior Vice President of Seaport at WS Development.

88 Seaport will consist of a 18-story structure featuring a faceted glass facade bisected by a large angled slice that will allow natural light to penetrate into interior spaces and will open up the building towards the Fan Pier Green and the water. In total, the building will offer nearly 425,000 square feet of office space, approximately 60,000 square feet of retail (located on the first two floors), and 5,000 square feet designated for civic/cultural use.

The project is being led by OMA Partner Shohei Shigematsu, who has helmed OMA’s New York office and work in the Americas since 2006.

“It’s exciting to engage with the innovation migration to the Seaport District, and work with WS Development on a building positioned to be the nexus between historic Fort Point and the emerging waterfront developments,” said Shigematsu.

“Our design for 88 Seaport slices the building into two volumes, creating distinct responses for each urban scale of old and new, while also accommodating diverse office typologies for diverse industries with demands for traditional and alternative floorplates. The slice also generates an opportunity to draw in the district’s public domains, linking the waterfront and Fan Pier Green with a continuous landscape.”

88 Seaport is expected to begin construction in 2018, with completion slated for 2020.

Completed in 2016 in Miami Beach, United States. Images by Bruce Damonte, OMA, Iwan Baan, Kris Tamburello. As the cultural core of the Faena District, the Forum provides a focal point to the neighborhood and to the mid-Beach zone at large. The ensemble of... 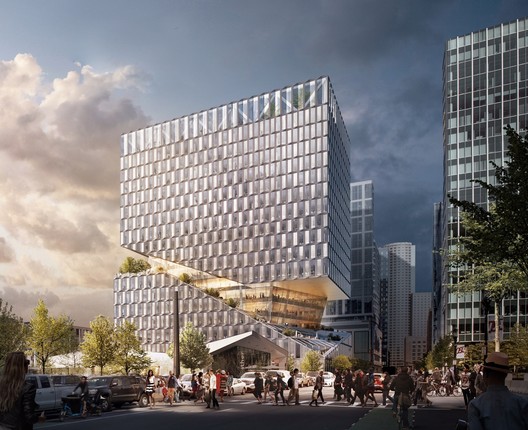