Looking to mount something or make alternations to a wall, but worried about hitting something inside? A new device, the Walabot DIY, will end those fears forever by giving you the real-life equivalent of Superman’s X-ray vision.

Unlike a traditional stud finder, the Walabot is able to detect a variety of different materials and objects, including but not limited to pipes, wires, conduit, studs and even living creatures like mice. Additionally, the device can even find objects that aren’t directly touching the outer sheetrock or concrete surface, up to 4 inches deep.

To use the Walabot, just snap the device to your smartphone using the provided magnet, download the app, and calibrate the device on the wall. Then run it along the wall just like you would with any stud finder. But instead of giving off an ambiguous beep, as you run your phone over the wall, it will show you exactly what lies beneath.

The device is manufactured by 3D-imaging company Vayyar Imaging, who offer a variety of services that allow customers to see through objects. The DIY-version makes the process easy, with quick set-up and a simple user interface, but for more advanced makers, they also offer additional kits that offer even more sophisticated features, including 3D sensing.

The device is currently available exclusively for Android devices, but is in the process of developing an iOS-compatible version.

Check it out for yourself, here.

NewsArchitecture NewsAppsConstructionWalabot
Cite: AD Editorial Team. "This Device Attaches to Your Smartphone to Let You See Through Walls" 30 May 2017. ArchDaily. Accessed . <https://www.archdaily.com/872505/this-device-attaches-to-your-smartphone-to-let-you-see-through-walls> ISSN 0719-8884
Save 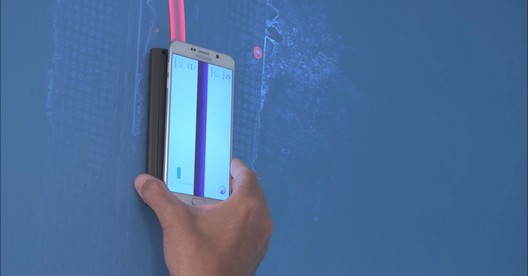