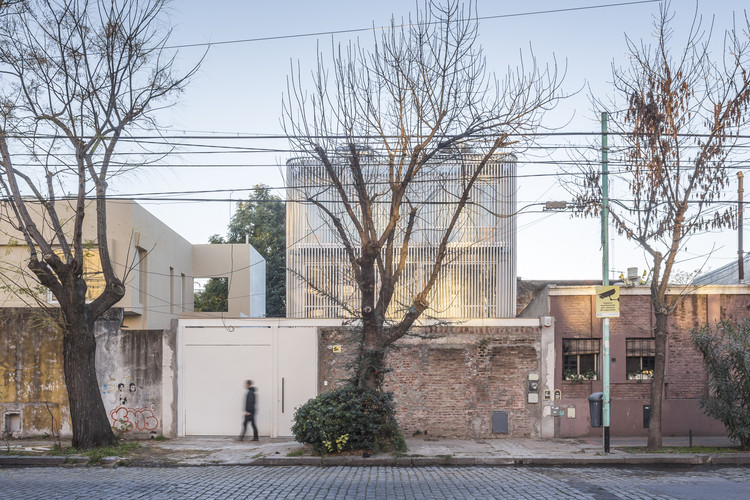 Text description provided by the architects. The Holmberg house is a detached house, located in one of the central districts of the city of Buenos Aires; Designed for a family of four, a young couple with two young children, its main feature consists of a perimetral integral skin through which circulates hot and cold water, and that allows thermal conditioning, transforming it into a kind of large radiator.

In a land between of ten meters of front by seventeen of bottom, and with a retirement of three meters of the municipal line, this house of three floors, like a prism of metallic structure and of dry construction, appears of the floor Low Between patios, specifically between three gardens; One toward the street and the west that functions as access; A lateral and towards the northwest border, that serves as pond or patio humid to control the climate; And finally a backyard with pool that unifies its green space with the apple lung.

With a flexible floor plan and no divisions, all rooms (living room, kitchen, dining room and three bedrooms on the upper floors) overlook several patios through large windows, creating cross ventilation in all rooms. The directions and connecting all the time together visually, thus making use of the terrain from end to end and exploiting to the maximum its dimensioned dimensions.

As for technology, in addition to its metal structure and "steel roof" slabs, the whole house is designed as a large water circulation system that can by means of tubes or perimeter pipes to the prism of the upper floors, Water for hot, depending on whether it is winter or summer, between two ponds, one in the shade on the ground floor and supposed to be cold, and the other hot on the top floor, which covers or closes the house in its fifth Facade Above the master bedroom.

This last pond will also be connected to a heating device by Thermopanels which in winter will generate a "hot mattress" that surrounds the house to limit heat loss and save energy.

All this system, thought as external skin, generates the final image of the house, so all the pipes that transport the water and surround the building, whether for irrigation or heating, prudently separated from each other, also function as umbrellas AND As a support For a wide variety of species, plants, birds and insects, transforming the facade into a kind of garden or vertical ecosystem.

As a study we are very interested in these issues and we have set out to measure the distance between the desired effect of the project and what actually happens with the use of the works that we are finalizing. We include in this report some notions generated by this survey:

Although they have spent relatively little time in their occupation and have not yet activated all their systems, the number of species that have proliferated in their gardens, thanks to the work of its occupants and the microclimate created by the project, in relation to the use Of the land and its general water circulation or for irrigation, is astonishing.

Every visit, the house welcomes us with a new species and the vegetation is covering the traces of architecture;

everything grows as if this space had transformed into a small oasis in the center from the city.

Cross-ventilation systems, umbrellas and insulation of the joints work perfectly, allowing the connection of artificial air conditioning systems, and the solar panels heat the water without any contribution from the grid and all the electrical connections are disconnected.

The pond, thanks to having generated a small life cycle between fish, plants and water recirculation has stabilized as a crystalline water ecosystem and is today, with its sound, flora and fauna, the center of attention of all The house and the humidifier by nature From the ground floor.

We believe that the ultimate interest in this work lies in its capacity to group its inhabitants, its flora and fauna with architecture, and that if all this works, the success of this house will not be based on any of the dominant preconceptions about Beauty or other issues directly related to our discipline.

Concept of housing "HABITAT" developed by the study

The contemporary world raises the reconceptualization of some subjects in relation to the architecture and all that it entails.

Today we can not refer to a house from a unidirectional look, like the container that houses and consoles the man, as well as we can not think of a site, separating the architecture from its