The design of OMA and Mia Lehrer+Associates’ park at First and Broadway (FAB) in Los Angeles has received a green update, reports LA Downtown News, following a community feedback session in which residents voiced their desire to add additional plantings to the scheme.

Selected last June as the winner of a competition for the park’s design, the scheme will retain its signature elements, including the OMA-designed sculptural shade canopies and restaurant structures, albeit with a few additions, including a rooftop deck on the FAB Food building.

But the most significant changes are seen in the center of the park plan, where nearly 10,000 square feet of planned hardscape has been switched out for grassy meadows.

“One of the things we heard most with the original design was ‘more trees,’ so we added more, and wanted to make sure they’re big enough to provide deep shade,” said Ben Feldmann, a principal at Mia Lehrer + Associates, in the News’ report.

Additional changes concern accessibility to the park: park entrances have been moved to the corners of the site, and a new ramp has been added near the restaurant.

The $28 million project will now move forward towards planned groundbreaking in 2018, with an opening date slated for early 2020.

Learn more about the competition here.

The City of Los Angeles has selected landscape architects Mia Lehrer + Associates (MLA) with partners OMA and IDEO to design a new public park at First and Broadway in downtown LA. Located across from Los Angeles City Hall, the new development, to be known as "FAB Park," will connect into the existing Grand Park, turning the area into one of the city's most important civic spaces. 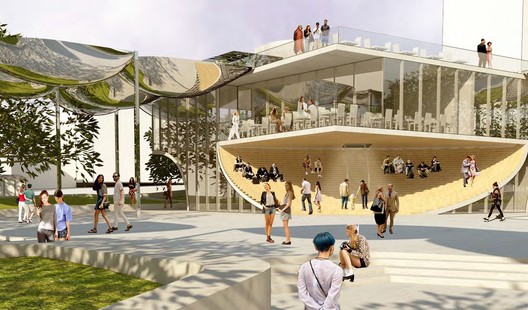