Save
From War Relic to Mixed-Use: Plans to Build a “Green Mountain” Atop a Bunker in Hamburg
Share
Or
Copy

A team of local residents and architects in Hamburg’s neighborhood of St. Pauli have been granted planning permission for a proposal to repurpose a war bunker dating back from the 1940s. Coined Hilldegarden, the proposal seeks to create a “green mountain” garden atop the disused roof of the bunker along with a range of mixed-use projects that increase its height by several stories. “We are rebuilding what we inherit.” The project’s initiative states, “Adding something to history while dealing with it and thereby reshaping history itself.” 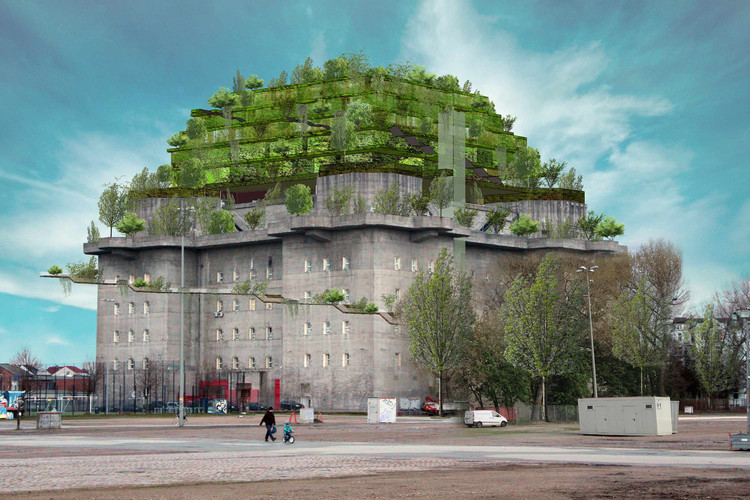 The bunker was used to launch anti-aircraft ‘Flak’ fire at enemy planes during World War II. Nowadays, the war relic is hardly abandoned – popular nightclub Übel & Gefährlich has occupied its north side, and the building is also home to a music school, an instrument store, graphic-agencies and a photographer's studio that pays 4000€€ rent per month. The bunker forms part of a series of mixed-use typologies occupying several of Germany’s big cities.

The view once made to shoot planes and see Karoviertel burn is nowadays one of the most stunning views in Hansestadt Hamburg – Hilldegarden Project.

The initiative for a public roof garden has been in the works since 2014, with a building permit recently issued in April. Composed of a diverse team of dedicated members, Hilldegarden has the participation of several design studios, including Buero 51, WTM, Schlaich Bergemann and Partners, Argus, Lärmkontor, Sumbi Ingenieure, Metapol Studios and landscape architects L+. The proposal seeks to extend the bunker’s 40m height to 59m with the addition of several mixed-use facilities from a kindergarten to a community centre to a hotel.

Hilldegarden’s proposal for a roof garden takes shape in a staggered, artificial hill offering 360-degree views of Hamburg. The walk up the “hill” will be open to the public until 10pm, offering a literally elevated experience of relaxing and drinking enjoyed in St. Pauli’s colourful neighbourhood (BYOB of course). Sustainability forms part of the project's driving force, with plans for a bio-kiln producing hot water and energy from rotting wood. Water will be collected and reused, and a public garden will form part of the green landscape dedicated to urban food production, with residents applying for planting plots.

Hilldegarden, like many regenerative projects is subject to criticism. Is the ‘urban spectacle’ really needed to bring people together? Is every abandoned building subject to its mixed-use gentrification fate? Do we need more trees on top of buildings? The grassroots team behind Hilldegarden's initiative seem to have taken its eccentric nature in their stride, writing, “an organic city looks divergent. We should pass the ideas of functionalists cleaning our minds whitecubeing our multicolored bodies.” More and more projects find success their extraordinary mash-ups of sustainability with programs, such as Bjarke Ingels ski-slope/power plant and MVRDV’s recently-opened Skygarden.

The initiative brings with it meaningful collaboration with Hamburg’s citizens in its building process, and in in terms of a bigger picture - city-making through cooperation.

The Hilldegarden will offer a view to all. For a new, more symbiotic city. Housing plants, trees, bees, birds. Symbolizing reunion, learning and collaboration. And a bit of plain hedonistic pleasure. Funded by investors. Made for everyone – Hilldegarden Project.

Find out more about Hilldegarten and its projects here.

22 From the architect. B-ILD - BUNKER The project was part of an advertising campaign for the office Famous. A dilapidated bunker was transformed into a holiday home allowing two families to win this bunker as a temporary holiday retreat. Due to the success of the refurbishment, it was decided to keep the bunker permanently open for accommodation.

Ctrl+Space has announced the winners of their Hamburg Hybrid Housing Competition, which prompted participants to design a mixed-use residential building in the St. Pauli neighbourhood of Hamburg, Germany. Entries were expected to reflect on the typology of the mixed-use building, exploring the set of relationships present with the city, the public, the time of day and the different programmatic areas.