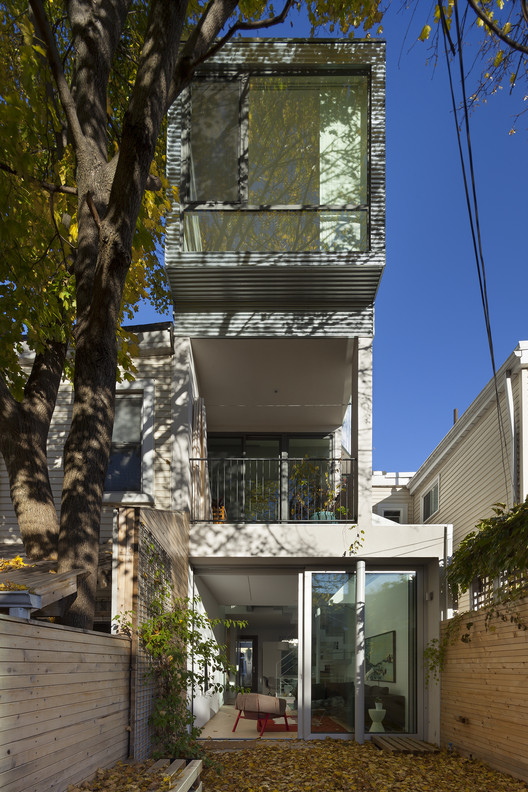 Text description provided by the architects. Twelve Tacoma by Toronto-based Aleph-Bau, stands out in a steady line-up of typical 19th century workers’ rowhouses in Toronto’s central Summerhill neighbourhood. The coloured brick facades and quintessential front porches of the neighbouring houses couch Twelve Tacoma in a local vernacular that both subdues and accentuates its modern qualities. This paradoxical sensation is born from the choice of materials: Twelve Tacoma’s white paint and corrugated aluminum cladding are distinctly elegant, crisp additions to an otherwise familiar neighbourhood aesthetic. Certain details—like the simple front railing and plexiglass awning over the door—mimic the ordinary signifiers of the neighbouring homes, but with a decidedly contemporary bent.

Yet, Twelve Tacoma is not over-bearing or out of place. The aluminum upper level goes almost unseen from the front of the house, poking up over the rooftop like a curious child. From the laneway in the back, the full vertical mass comes into view, as stacked viewpoints dissolve the borders of inside and outside, bringing the nearby foliage into the home and the inhabitants to the outdoors. To construct the third-floor addition without burdening the party walls, a new steel structure is introduced to the original wooden building from the ground all the way to the upper roof.

The interior is austerely furnished and minute details repeat with a refreshing dogmatism. Even the modular sliding storage units in the front hall and bedrooms work to conceal the usual clutter of domestic life, creating a holistic composition that emphasizes near-Fordist organization standards.

What takes the house beyond the more somber or uninhabitable effects of modernist aesthetics is its welcoming relationship to natural elements. Twelve Tacoma is open and transparent, inviting nature in. An upstairs bathroom is fitted with a wall of plants, overhanging the bathtub, with the whole space set in slightly by a balcony but nevertheless featuring an unabashedly curtainless, floor-to-ceiling glass door. Large windows running all the way down the rear exterior wall of the house open up the space to sunlight and reflect an energizing brightness in the interior. The staircase in the center of the home acts as a pivotal force in the design, its whimsical geometry giving the space a playful character, while the basement living room is slightly sunken, making the concrete bench seating feel like a small, personal amphitheatre.

“Architectural elements disappear in favour of the atmosphere- one that is an amplified reflection of the outside; light, the sky, the clouds, the neighbors’ tree, the sound of rainfall and the shabby structures in the laneway are inside now” says Delnaz Yekrangian, Aleph-Bau’s director.

The rooftop terrace and unusual geometries of the house are unprecedented reactions to Toronto’s strict zoning and code regulations. The architects have worked with and not against the stipulations to seamlessly integrate small cubby holes and simple railings that appear, effortlessly, as if they had always been a part of the original design.

Aleph-Bau’s project amplifies the sensory, imaginative and intellectual relationship to traditional architecture in an intense dialogue with its urban context and surrounding natural elements. 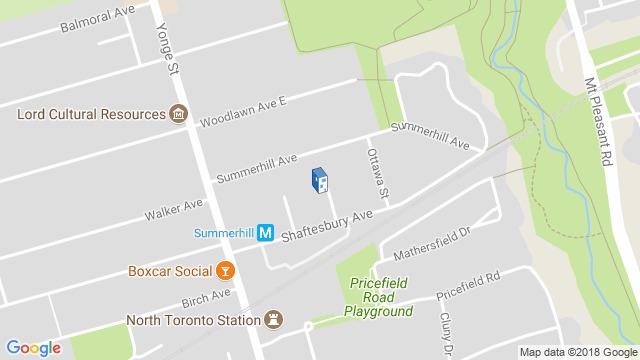