Today the Mayor of Seoul opened the Skygarden, a 983-meter elevated walkway designed by MVRDV which utilizes a formerly abandoned highway in the center of the South Korean capital. Located in Seoul's Central Station district, the 16-meter-high linear park features a living catalog of Korea's indigenous plants, featuring over 24,000 individual plants from 228 species and sub-species. The Skygarden is known in Korean as Seoullo 7017, a name which references the Korean for "Seoul Street," and the 1970 and 2017, the years in which the structure was originally built and subsequently transformed. 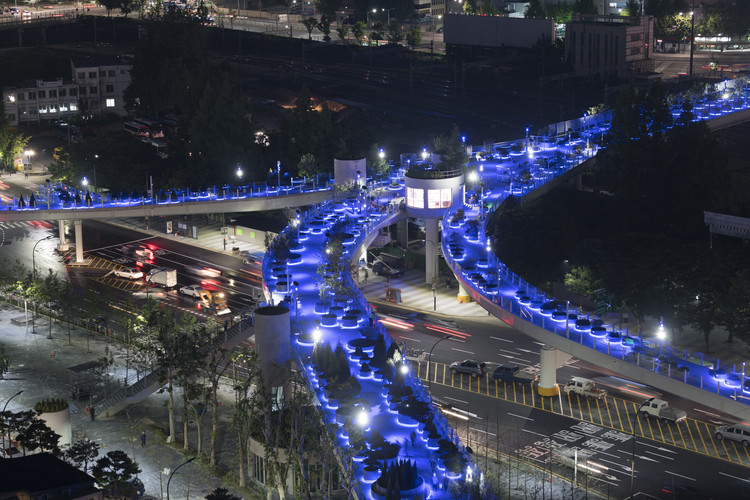 "Our design offers a living dictionary of plants which are part of the natural heritage of South Korea and now, existing in the city center," said Winy Maas, founding partner of MVRDV. "The idea here is to connect city dwellers with nature, while at the same time also offering the opportunity of experiencing these amazing views to the Historical Seoul Station and Namdaemun Gate."

In addition to providing green space in the center of Seoul, the Skygarden is designed to be an educational experience. "They are planted in containers of different size and height and organized in groups of families. The families are ordered according to the Korean alphabet," added Maas. "This leads to surprising spatial compositions.”

This alphabetized grouping led to a design strategy which sees the park split into a variety of sections, with different families of plants offering differing identities with respect to color, fragrance, and composition. For example, in the fall, an area of Maples will display bright-colored leaves, in spring cherry trees will blossom, and in summer various fruiting trees will bring color and fragrance to the park.

While the park itself is the main attraction, the renovation of the former highway also incorporates shops, galleries, tea houses, a theater, information centers, maintenance boots and restaurants. At night, the park is lit up in blue light, a color which can help make plants healthier, however the color of the light can also be adjusted for events and festivals. Multiple stairs, elevators, and ramps onto the structure, some adapted from the on-ramps built for the original highway, help the new park to connect together different parts of the area, improving the experience pedestrian for pedestrian users of the city. 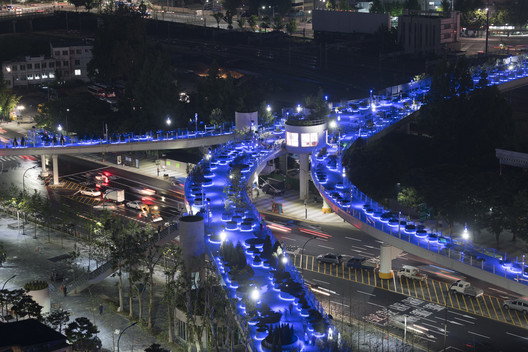