Earlier this year, the Global Seed Vault in Svalbard was flooded after record high temperatures over the winter caused some of the permafrost surrounding the vault to melt, reports The Guardian. The building's entrance tunnel was flooded and then froze to create conditions "like a glacier" for those trying to enter. Fortunately, the vault itself was not breached, meaning no harm came to the building's precious contents. However, the incident has raised questions about whether the building will be able to fulfill its purpose in the long term.

The vault was opened in 2008 as part of a worldwide initiative to preserve global biodiversity—in particular, to preserve the seeds of important food crops worldwide to serve as a backup in case of any disaster which might wipe out existing crops. While many countries maintain their own seed vaults, the Svalbard vault was intended as a failsafe, in a place that is rarely affected by world events. The importance of this logic was demonstrated in 2015, when Syria made the first ever withdrawal from the bank to replace parts of their own archive which were lost as a result of the Syrian civil war.

However, this year the security of Svalbard as a location for the doomsday vault has been called into question. The vault is buried into a hillside on Spitsbergen Island, as the permafrost in the ground at this location helps to reduce the mechanical cooling needed to keep the seeds at a safe -18 degrees celsius. But as the world experiences increasingly extreme temperature changes—with areas near the poles more dramatically affected—that permafrost is no longer as reliable as it was just 10 years ago. “It was supposed to [operate] without the help of humans, but now we are watching the seed vault 24 hours a day,” Hege Njaa Aschim, a member of the Norwegian Government, told The Guardian.

Managers of the vault are now taking precautions to waterproof the entrance tunnel and create better drainage around the entrance. In addition, they have installed pumps inside the vault itself, which would protect the seeds in the event of a more severe flood. But with climate change seemingly only accelerating, it isn't yet known whether more might need to be done. “The question is whether this is just happening now, or will it escalate?” asked Aschim. “We have to find solutions. It is a big responsibility and we take it very seriously. We are doing this for the world.”

Added Åsmund Asdal at the Nordic Genetic Resource Centre, which runs the vault: “This is supposed to last for eternity.”

Story via The Guardian. 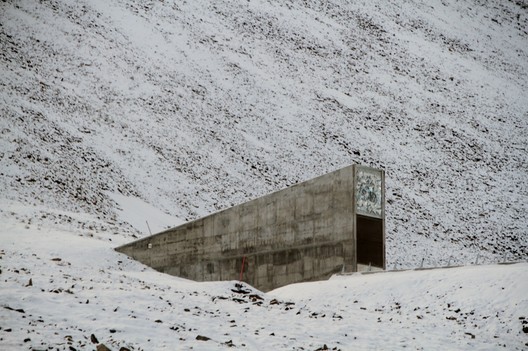