It happened in the middle of the night: the stealth whitewashing of 5Pointz, Long Island City's unofficial graffiti museum. In 2013 owner Jerry Wolkoff, of G&M Realty, wanted the building razed in order to erect new luxury condominiums, and the artists sued to preserve their work. A judge denied the artists' request and Wolkoff had the murals destroyed under cover of darkness, ostensibly to prevent them from attaining landmark status. Though graffiti was born as a subversive act, these artists had painted with Wolkoff's permission since 1993 and had turned the warehouse into “the world's premiere graffiti mecca” and the largest legal aerosol art space in the United States. This was a serious betrayal.

Recently, the artists refiled the suit and the developers requested to have the case dismissed, but on March 31st, three and a half years after the initial filing, a Brooklyn judge ruled against the builders, saying the case could proceed to trial. It's a bittersweet victory; the colorful public monument to aerosol art can never be replaced. In its place is a construction site where two bland apartment towers rise, adjacent to the No. 7 train lines, 400 million dollar's worth of soulless steel. Ironically, the new HTO Architect-designed towers might also be called 5Pointz, a name that symbolizes the five boroughs of NYC and was immortalized by the graffiti artists.

With the case now proceeding to court, the jurors will decide whether the destroyed artworks qualify as pieces of "recognized stature," which are protected by the Visual Artists Rights Act (VARA), a 1990 copyright law amendment created to comply with the rules set forth in the Berne Convention, the international standard on copyright. VARA protects the moral rights in an artist’s work, the idea that art should not be wantonly altered or destroyed. That gives artists certain rights over work they created, but do not own. The key words are "recognized stature": it’s up to the subjective discernment of others to decide if Wolkoff will be forced to shell out reparations.

There is precedent that suggests they could win: Muralist Kent Twitchell won a $1.1 million settlement thanks to VARA when his iconic, six-story-tall Ed Ruscha monument in Los Angeles was accidentally painted over in 2006.

Aerosol art, graffiti, street art, urban art, defacement of property, call it what you will. It oozes social consciousness and protests injustice. It embodies the empowerment of society’s marginalized voices. There's no denying its impact, especially its transformative power. Once upon a time, Miami’s Wynwood Art District was a blighted neighborhood with one of the nation’s highest crime rates. A few dozen murals later and the area has metamorphosed into the hippest hood imaginable, boasting the trendiest galleries, restaurants, and bars. Anchoring the artistic gravitas of the area are the famed “Wynwood Walls,” a privately sanctioned free outdoor street art “museum” founded in 2009. The walls feature the original work of over 50 famed street artists from 16 countries—all exclusively invited to decorate over 80,000 square feet (7,400 square meters) of concrete canvas.

Los Angeles, always at the vanguard of everything, passed a citywide mural beautification ordinance in 2013. A new work requires a $60 fee and a meeting with community representatives to vet the proposed artwork. The mandatory community meetings spark a discussion about public art that makes everyone feel included. In Buenos Aires there is an area called Zona Del Graffiti where aerosol artists don't have to practice their craft cloaked in darkness: if they have the building owner's permission, they can spray away as they please. Sometimes, they're even subsidized by local government.

Such was the case of Argentinian artists Franco Fasoli (Jaz) and Nicolas Escalada (Ever) and Canadian Derek Mehaffey (Other), who in 2014 sued Monty Python creator Terry Gilliam's production company Voltage Pictures and distributor Amplify Releasing for allegedly featuring a large mural of theirs in certain scenes of the film The Zero Theorem without their permission.

In 2014, Aholsniffsglue, a Miami artist whose real name is David Anasagasti and whose graffiti is featured in Wynwood, filed suit against American Eagles Outfitters for copyright infringement when the retail giant used his signature sleepy-eyeball motif in a marketing campaign without paying him a dime. In the end, the mega corporation buckled and settled out of court.

What grants street artists Copyright protection? In the United States copyright protection is available for all "original works of authorship, fixed in a tangible medium that has a minimal degree of creativity." A work of art that does not meet all three criteria is not copyrightable. However, courts have traditionally deemed that illegal work is not subject to copyright protection—the reasoning being that no one should profit from his or her misdeeds. Was there trespassing or vandalism involved? If so, you're screwed.

But not all animals are created equal. Banksy, for instance, thrives because of (not in spite of) the illegality of his work. His guerrilla tags give him a roguish élan that makes his work valuable to art collectors (and often loathed by fellow graffiti artists). A new Banksy whips the public into frenzy. As fans rush to catch a glimpse of his politically charged stencils, fellow street artists scramble to deface what they see as the privileged, derivative, highly overrated signature of a sell-out.

The excellent 2014 documentary Banksy Does New York catalogs the famous 2013 NYC residency of the mysterious aerosol provocateur. We might not know who he is, but Banksy murals, in contrast with the work of most graffiti artists, have fetched millions at auction. And nothing, not the illegal reproduction of his work, nor the removal of a wall adorned with his figures, nor the constant condemnation from other graffiti artists lures him out of hiding. His anonymity equals no fear of copyright infringement. The fact is, not many copyright infringement cases make it to court, and those that do usually end in a settlement.

What was once known as “the biggest countercultural movement since punk” has matured, and unfortunately lost some of its anarchic charm in the process. Banksy’s shtick remains interesting because the spontaneity of the field has grown scarce. It’s painful to concede, but street art has started to be associated with gentrification. The Tragedy of 5Pointz proves this: as justice for the artists remains to be seen, the developers announced the inclusion of a sanitized “40 by 80-foot edifice” and “designated mural walls” in the new complex. They just don’t get it.

The moral of the demolition of 5Pointz is about authenticity. “It was about artists coming in and telling a story” laments former 5Pointz Curator Marie Cecile Flageul. “This is the difference between public art and Times Square.” 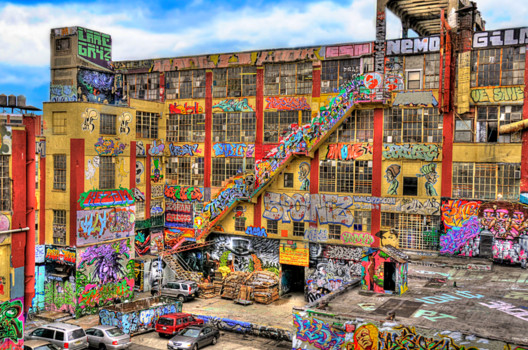