The team consisting of Henning Larsen Architects, Adamson Associates Architects and PMA Landscape Architects has been announced as the winners of a competition to design the new 500,000-square-foot (46,500-square-meter) Etobicoke Civic Centre, beating out proposals from three other top teams.

Located in Etobicoke Centre, one of four mixed-use districts marked by the City’s Official Plan as a “vital” community, the new Civic Centre will feature municipal offices, civic function and gathering space, a community recreation center, a branch of the Toronto Public Library, a child care center and an expansive outdoor plaza.

Organized by Build Toronto with the City of Toronto, the competition jury weighed the four proposals under the following criteria:

The proposal by Henning Larsen, Adamson Associates and PMA was selected by the jury for best satisfying these guiding principles, as well as for showing “flexibility and an iconic design well suited for the community.”

"This proposal sensitively reinterprets its context of place and possesses a depth of design story beyond the skin of its built form. It showcases a unique ability to openly welcome and engage everyone in a setting that is both civic and communal," said Jury Chair Gordon Stratford.

The winning design has been organized into volumes of a myriad of scales, each topped with a unique roof condition, creating microclimates and a variety of spaces that encourage people to engage in the public realm.

“We have utilized careful site analysis and local thermal studies to propose a dynamic and coherent design, with a streetscape designed for comfort, microclimate and the human scale,” explain Henning Larsen architects. “The comfortable outdoor season is prolonged by up to five weeks. The structure will protect and gently guide the wind above the urban spaces.”

"There is no civic initiative more important to the Etobicoke community than the redevelopment of the Westwood Theatre Lands,” said Councillor and Build Toronto Board Director Justin Di Ciano. “This exciting development will become the new heart of Etobicoke where residents can join together to celebrate civic, cultural and seasonal activities."

See the runner up proposals below: 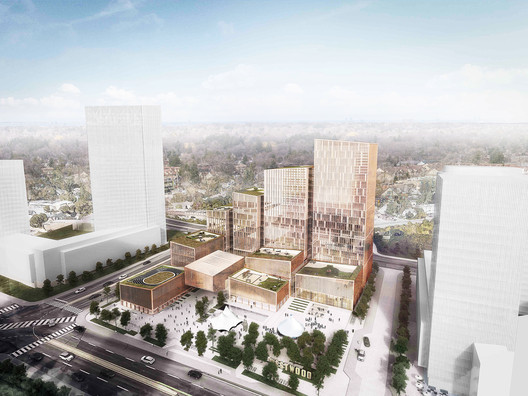