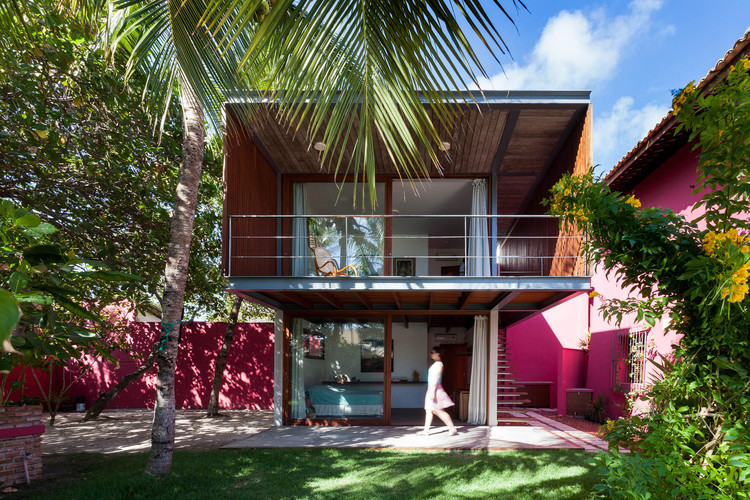 Text description provided by the architects. We have a dear and long-time client who owns a house at Lauro de Freitas, a summer resort town near to Salvador, Bahia. He asked us to plan an independent annex to receive his family and friends.

From the beginning the new building was designed as an autonomous unit without having a direct connection to the rest of the house. In addition, thanks to the external vertical circulation, the two floors of the annex can be accessed separately, enhancing the independency of the rooms.

The corner lot, with 1,250sqm, located near to the beach is largely occupied by a generous and well-tended garden with many coconut trees. Preserving the existing vegetation was a requirement of the owners and therefore the only way to create additional construction space was the demolition of a small laundry. Thus, the location of the new building was defined.

The property has a sandy soil and therefore the structural engineers suggested a flat foundation. The ground floor was built with concrete bricks, the second floor is a metal frame covered by a flat prefabricated concrete slab. Over the roof an irrigated garden was installed. This decision aims to improve the construction’s thermal performance and an energy consumption reduction with HVAC, as the climate in the region is very hot.

Sustainable and certified wood is highly appreciated by the owners and was used in many ways. The wood floor of the intermediate pavement is mounted over wood beams., the vertical “brise” surrounding the entire second floor is made with wood slats that protect the balcony from the sun and wood has also been used in the manufacture of all frames, furniture and other finishes. The space has achieved the expectations and due to its openness to the nature ended up becoming the owner's refuge.