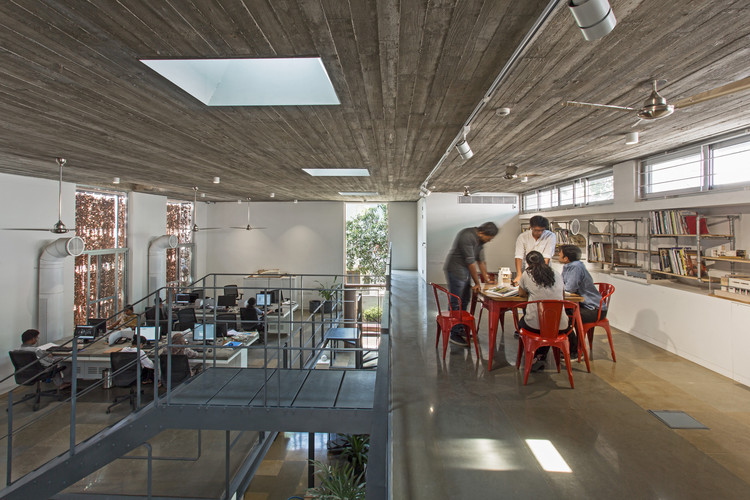 Text description provided by the architects. The designers and engineers of KSM Architecture set out to design and build a new studio for themselves in the midst of the city's emerging commercial hub. An east facing plot of 380 sq.m with an existing 35 year old temple and four trees was chosen. Sripuram Colony, 1st Street  is quite typically an Indian street with a mixed land use.

The building was envisaged as a simple two storeyed structure from the outside that does nothing more than act as a container. The scenario on the inside is completely different however, as 5 different levels are created on either side of a central void space acting as a contiguous link with the street in both a visual and sensory manner. These five levels house the principal designers, the architecture and the engineering studio, a library and a workshop. In addition to these, a cafeteria is located on the terrace level. The entire studio is covered by a roof spanning 10.70m that envelops the different functions as one single volume

The climate in Chennai is hot and humid all year round. The slightly cooler months are between October and March. According to the solar path, the sun falls on the northern face between May and July, which is the hottest time of the year, and for the rest of the months it falls on the southern face of the building. Climatically speaking, the roof contributes for more than 60% of the heat gain. In addition to this, Chennai has a constant southern breeze at velocities of around 1.5 m/s almost all year round. This breeze coming from the sea is always at a lower temperature and has traditionally been harnessed for ventilation of buildings in Chennai.

Keeping the climatic conditions in mind, there was a need to wrap the building with a self sustaining 'skin'. The 10.70m clear width of the studio is spanned with 450mm deep concrete rib beams at 1.0m spacing. The roof is insulated with  250mm thick high-density polystyrene blocks sandwiched between two 100mm thick concrete slabs giving a clean soffit. In addition to this a layer of high solar reflective index tiles cover the roof that further reduce heat gain. Three skylights, 300mm square, are set in trapezoidal steel cones in the roof slab bringing in diffused light into the studio. A verandah like cafeteria with an inclined bamboo roof runs along the eastern edge of the building. It shades and directs the cool sea breeze through top-hung openings at the roof level into the studio.

The eastern and southern facades are covered by a curtain of sliced bamboo culms of 60mm length, strung together along a steel rod. This arrangement serves three purposes -- 1) It cuts the glare from the morning and afternoon sun into the workspaces 2) Brings in the prevailing southern breeze into the workspaces and also acts as a dust trap 3) Brings down the temperature by a significant amount in the interior spaces.  Two motorized wind catchers are placed close to the roof on the southern side with flaps that open out perpendicular to the wall and help draw in the ambient breeze into the interiors.

The Northern face has lesser openings on the upper levels as it faces the sun during the hottest period for almost four months. The few openings have deep set windows to cut down the critical sun angle The lower levels having glazed sliding doors which are shaded by a bio-canopy of an evergreen indigenous flowering creeper, jasmine flower 'nithyamalli'.

The Western Facade has just one opening, since heat gain on this wall is the generally high. The existing mango tree on the site provides some amount of shading while the majority of the facade is a blank bio-wall covered by another evergreen flowering creeper, passion flower 'mupparisavalli', which acts as a heat insulator.

Locally available materials have been used in building the studio. The use of the bamboo screen brings about a veil like feel to the building thus letting in a lot of light while at the same time cutting it from the harsh outdoor conditions. The yard spaces are covered by a pervious concrete bed that harvests all the rain water. The interior spaces are covered by a locally available limestone 'Tandur' stone which possesses a natural color variation visually, while maintaining a cool surface. The concrete shuttered in recycled pine wood planks gives a textural feel to the space.

Though it holds various functions together, the central atrium space visually connects all the floors into one thus creating a connected working atmosphere for the employees.  The levels are connected using a series of straight-flight and split-spiral staircases at different locations that add to the experience of moving between the spaces.

Exposed air-conditioning ducts are integrated seamlessly into the interiors of the workspaces. Sleek workstations that conceal the services topped with fiber reinforced concrete maintains the tonal quality of the spaces. The pine wood used for shuttering is reused as library book stacks along with reused plumbing pipes.

KSM Architecture Studio embodies the design beliefs and principles of the practice, that has been about environmentally friendly and climate sensitive and relevant architecture. 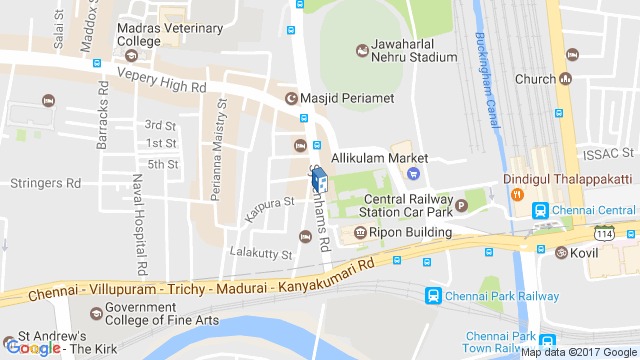 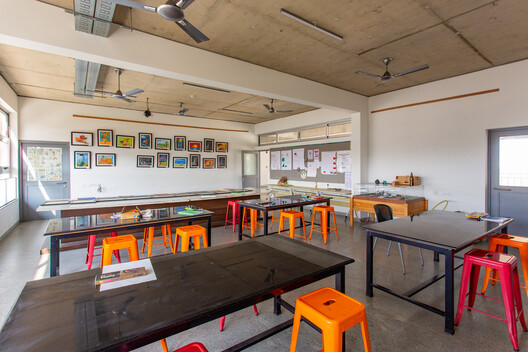 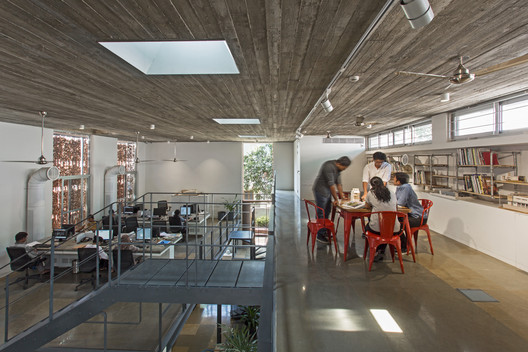