✕
Save
Visualizations of the Most Used AutoCAD, Revit, and 3dsMax Commands
Share
Or
Copy

The 'Customer Involvement Program' of Autodesk's research department has, over the years, compiled a database of over 60 million individual commands created by anonymized users. Each reveals shortcut paths and thought flows among its customer base. The team have visualized the product usage (here described as the Command Usage Arc project) by ordering known and new commands from the most-frequently-used to the least-frequently. Revealed as a sequence of infographics, the results demonstrate how people work – and how they often deviate from prescribed usage.

The size of the text and length of the bar are proportional to how frequently the command is used. We recommend that you open the PDFs on a large, or zoomable, screen. Click on the links to open them in a new window. 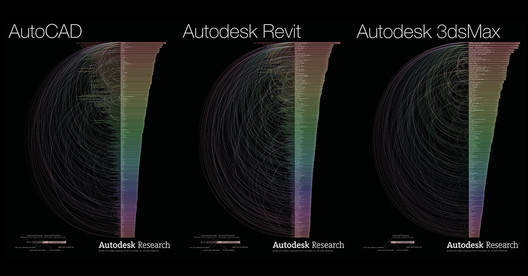