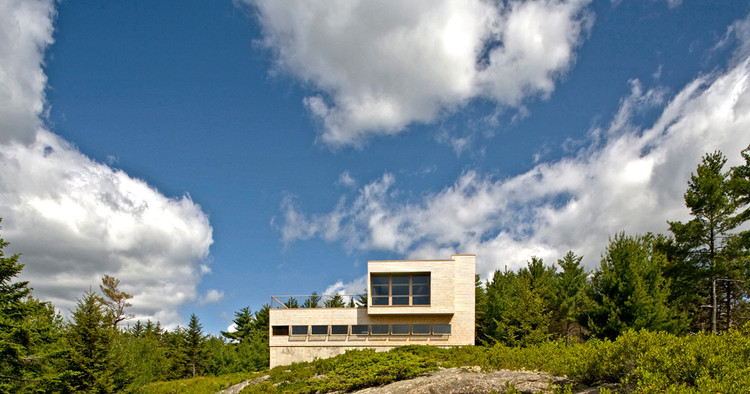 Text description provided by the architects. The genesis of this project came from the clients, a couple who had lived many years in a treasured 19th century cape, and who sought a significant change in lifestyle. Their deep appreciation of that cape and its particular relationship with its site made them realize that their new site--a spectacular inland promontory on ledge, juniper, and blueberries with extensive views—required a very different architectural solution.

The concept that evolved was a perpendicular stacking of two simple volumes. This allowed a relatively small footprint on a pristine site, and also created useful negative space—a carport below, and an expansive deck above. Furthermore, it guaranteed that the house took advantage of the entire site, ensuring each space its own particular, appropriate relationship to sun, passive solar gain, and views.

The plan is simple and rigorous, based on the module of a single prefabricated window unit that is used throughout. The entirely-wood structural system was edited and refined to allow speed and clarity in the construction process. The sober expression of the house responds intentionally to the climatic demands of the site, and is clad humbly in white cedar shingles, the most traditional of New England building materials, and exactly what was used on that cape built a century and a half ago.

The priority on the interior was to create calm spaces deeply influenced by the seasons and weather. The clients consistently prioritized clarity and generosity of space over luxurious finishes and fixtures. A simple palette of concrete floors, gypsum board walls and medium-density-fiberboard cabinetry makes up the great majority of all surfaces in the house. A remarkably low construction cost was achieved because of the clients’ ability to prioritize goals, the design team’s search for simplicity in both aesthetics and construction techniques, and the builder’s ability to propose alternative, less expensive solutions for aspects of the building.