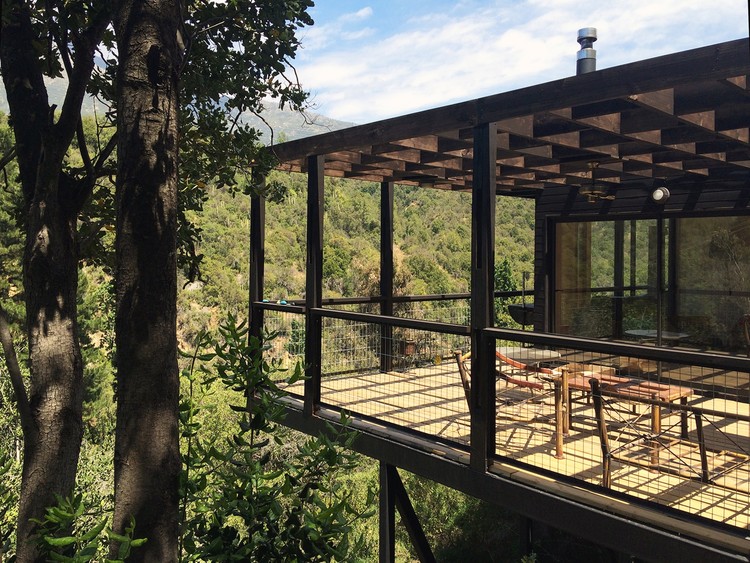 Text description provided by the architects. The roost is a family-run cabin lodge located in the Andean foothills near San Fernando, in Chile’s central mountain range.

The presence of rivers and large canopies of peumo, quillay and oak forest constitute a natural environment with large ecological and landscape value, making this spot an important place for spotting birds such as the Burrowing parrot.

The architectural concept defines the site location as the primary strategy on which the layout is based. One story is laid out along the southern-facing side of a hill that slopes steeply toward the river. This gives off a view toward the valley, with the north to the rear.

The bedrooms are projected toward the south and incorporate the primary vistas, while the sanitary services are toward the north and the hillside, leaving an interior hallway which features a horizontal skylight in the roof that faces north, bringing natural light to all the rooms.

The more common areas are integrated within one space that links the sloped ground and geographical expanse of the valley.

The exterior of the house features 3 landscape-related spaces. The southern, elevated hallway hangs toward the river and mountain valley. The eastern-facing access deck looks toward the large Andean rock formations, with the deck/overlook open to the entire surroundings and open sky.

Construction was undertaken by local labor using basic, low-cost materials. The structure is comprised of a metallic base on which the cabin is raised in standard-dimension pinewood for the structure and exterior siding, with laminated plywood sheeting used for the interior veneer and finishing.