Save
Finding Love in the Sand: The Instinctive Architecture of the Pufferfish

How much effort are you willing to put in to attract that special someone? The humble Japanese pufferfish, just twelve centimeters long when un-puffed, almost certainly has you beat. To attract the best fish in the sea, male pufferfish spend at least seven 24-hour days completing an intricate mating ritual that involves swimming their bodies into and through the seafloor to form ridges and trenches in the sand. If they pause too early, the entire ordeal gets washed away by currents.

The finished construction is a set of concentric circles that span up to two meters in diameter, with peaks and valleys radiating from the center. For the finishing touch, the puffers move bits of coral and shell to decorate the periphery of the mandala-like design in the sand. Potential mates swim by and judge the males based on their construction technique and, after making a decision, lay their eggs at the center. The reason behind the decision? It's not exactly known. One theory, as reported by National Geographic, purports "a larger nest could indicate a stronger or more fit male—both desirable traits to females." To see the male puffer "architects" in action, check out the above video from the BBC. Any fin is possible for these little guys! 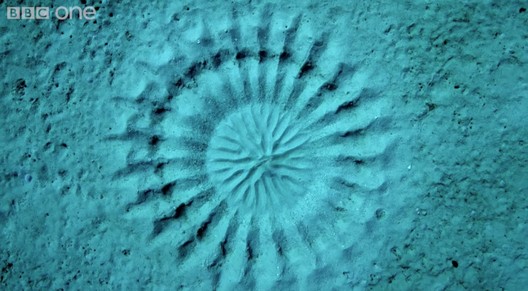