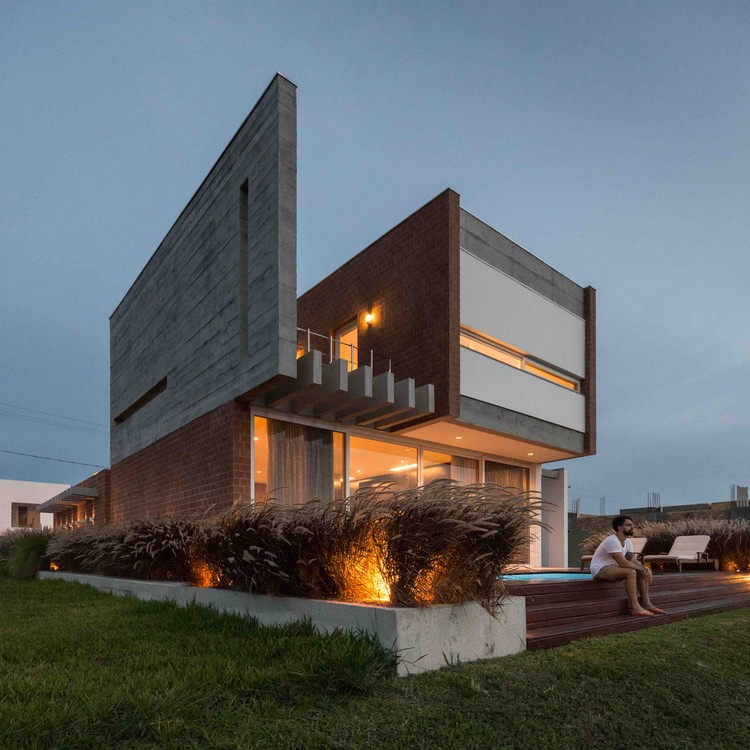 Text description provided by the architects. When we received the demand, one of the first things we thought about was: let’s get away of the classic tipology of the exposed house, so massively used in the condominiums of the region – with from top to bottom glazing and a two-story high ceiling. The idea was that the house kept the privacy preserved and then, in the social lounge, opened to the deck in the backyard.  With the same premise in mind, we came up with another project attitudes that guided us, as raising the ground floor 50cm  to avoid that the parked vehicle was seen from the living room window, and, with this, the main access would be made by a minimum slope ramp, protecting the pushed back entrance door. We also had attention with the size of the windows, for privacy reasons, since the lots are narrows and the neighbors can have their openings 1,5m from the border.

Because it is a beach house, our demand was that the bedrooms were small, functionals and the living areas were priviledged. The cliente also wanted that the house was made to every public, so we have 02 bedrooms on the ground floor, due to accessibility issues.

In volumetric terms, we thought  the volume that houses the social area being more open, relating directly to the backyard, where are the deck and pool. To separate the intimate volume, still on the ground floor, we used the internal garden, wich breaks the volumetry of the ensemble in two blocks – we gained four more openings, keeping the cross-ventilation. The second floor is solved as a single block, with the private balcony resulting from the meeting of the lower volume with the upper one, only protected by a wall of apparent concrete.

By the way, the composition of planes was preponderant, beginning by east façade. To break the formal hardness of the whole, we worked with the decomposition of the volumes into planes. Its is possible to perceive this in the lateral façade, where the lower plane is ‘read’ as two ceramic brick parts (pergola wall, wich divides the secondary access and the lateral wall of the social area), the upper plane of the private block also made of brick and the concrete plane wich gives privacy to the balcony. The same logic was used in the front and back façade, where the bick planes pass 10cm e release the other elements: beams in apparent concrete, plastered and white painted mansory and glass openings. Always with the intention of giving legibility to the set, characteristic that we believe to be determinant of a great 'design'.