The renovation of this 156,000-square-foot civic monument provides immersive and engaging learning experiences for patrons inside as well as pedestrians who pass by. Originally constructed in 1895, this renovation has dramatically transformed a wing of the library from a solid stone bunker to an inviting light-filled space that spills out into a newly defined public plaza. The interior space was carefully reconsidered through the lens of a 21st-century patron to address the needs of all visitors, from pre-readers to adults. To further serve as a hub for education and innovation, the library boasts a range of spaces for both formal and informal convening. A 340-seat auditorium, open space for performances, and a conference center have helped increase public interest and the free flow of ideas. The greatest benefit to patrons, however, is the much more fluid connection between both wings of the library.

Surrounded by lawns, meadows, and planting beds, the library’s façades are clad in metal panels complemented by storefront glazing with varying levels of transparency—greater in public areas and less in staff and support areas. The simple configuration, flooded by reading-friendly northern light, provides maximum flexibility for the rapidly changing needs of modern libraries. Having achieved LEED Silver certification, the library’s sustainable strategies can be noted throughout. Interior fins and external louvers on the library’s west-facing glass control heat gain while still providing quality reading light, and advanced HVAC systems in the public areas provide service from only the perimeter, allowing easy accommodation of new technologies and future opportunities. Further adding to the library’s arsenal of teaching tools, a series of LED screens displays the structure’s energy performance in real time.

With its glass façades overlooking the 18-acre park that emerged from the city’s Big Dig project, the new library boasts an airy column-free reading room with dedicated areas for adults, teens, and children. The open plan allows families to visit together and not be corralled into separate rooms, while clear sightlines maximize staffing efficiency. Shelving on casters lends extra flexibility, allowing librarians to curate the collections over time and adapt to the evolving needs of a modern library.  Capping the library is an undulating roof that admits ample daylight to fill wood-wrapped common areas. The site was a former brownfield and, beyond its transformation into a civic hub, the library has a number of sustainable features. In addition to high-performance mechanical systems and proximity to mass transit, a stormwater garden greets visitors at the sidewalk, with signage describing its role in promoting the health of Boston Harbor. Overshooting the city’s target of Silver, the new library received LEED Gold certification.

The new library, at nearly 600,000 square feet is situated at the terminus of a bridge spanning the River Daugava. It was envisioned as a place to store, preserve, and make accessible the country’s cultural heritage. To that end, it is supported by state-of-the-art technology that allows for easy digitization and safe storage. The library’s form dovetails with functionality by accommodating the various collections areas. Presented in vertical arrays in appropriately sized spaces, they all connect to the central stack core. A full wall display of books donated by Latvians as a symbolic gesture soars through the atrium and teases the massive adjacent stack area. The atrium itself, with its central stair, provides connectivity to all the public levels and serves as a unifying element that illustrates the library’s logical organization and circulation.

Expanding from a single-room Carnegie branch library that had served Stapleton, Staten Island, for a century, this project has created a new 12,000-square-foot library that better serves the community. Open, inviting, and accessible, the project stitches together new and old buildings, and provides equal space for tactile and digital learning opportunities. Restored to its original design, the existing Carnegie library now houses the children’s area, while the expansion on the other side of a transparent community room contains teen and adult reading areas and research facilities. The library’s exposed-wood structure provides rhythm and richness, while the glazed façade supplies natural light and invites participation. Additional natural light comes courtesy of multiple framed skylights, and the variegated surfaces of the roof and façade diffuse and deflect sound waves to soften the acoustics of the open plan.

Funded entirely through the Federal Emergency Management Agency’s recovery program, the project involved the restoration of a 1917 Arts and Crafts bungalow that serves as a community center and reconstruction of an adjacent 6,300-square-foot library wing. Together, the new library and restored community center provide the neighborhood with an innovative 21st-century facility that offers ample opportunities to engage with technology and alternative educational outreach programs. The project has achieved LEED Silver certification, with all its aspects bearing hallmarks of sensitive community engagement. Key programmatic elements—evident in the catering kitchen and café—reference the importance of culture as the driving force that helps communities recover from disaster. With food and its preparation playing a pivotal role in the lives of so many Louisianans, the adjacency of food and words is the perfect match for a very New Orleans–style approach to sustainability.

Guided by feedback provided by the University of Oregon’s student body, this project included a complete renovation and addition to an existing underground library. Atop an 48,000-square-foot underground library, the project added 4,000 square feet of new space. Occupying a difficult site wedged between two buildings, sub-floor-to-high-ceiling windows illuminate the commons space with natural light. A new entry pavilion supplements a brutalist courtyard that exacerbated the subterranean conditions of the existing library and maximizes available light below. A wood curtain wall sprouts organically in the courtyard, creating a calming forest atmosphere that completes the expression of light and nature. Students and faculty have enjoyed the variety of spaces, with some students remarking that they had forgotten they were underground since the space no longer feels like a basement.

Firmly rooted in its natural environment, the library’s design was inspired by the community’s vernacular. With a series of pavilions that emerge and cascade down the landscape, the design’s simple palette and forms evoke an assemblage of tobacco barns. Inside, the new library provides countless opportunities for patrons to engage with the collections and the staff.  The client and the design team worked hand in hand to develop an intuitive floor plan that maximizes views of the natural setting, further amplified by a back porch–style overlook in the rear of each pavilion. To provide easy access for its nearly 300,000 cardholders, the library’s configuration allows for quick transactions when needed. Following that directive allowed the team to consolidate programming and take a balanced approach to open day-lit spaces and enclosed quiet spaces, and to increase efficiency in the mechanical systems and ductwork runs.

The jury for the 2017 AIA/ALA Library Building Awards included:

More information on the award and the winning projects can be found here.

News and project descriptions via AIA. 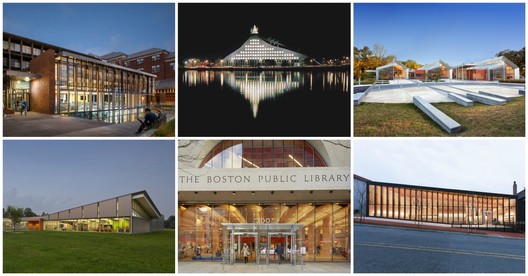