As Zaha Hadid’s 520 West 28th approaches completion, photos of the apartment interiors have been revealed for the first time. Shared by developer Related Companies, the images show two of the building’s first completed residences: the massive 4,500-square-foot Unit 20 and the more modest 1,700-square-foot Unit 12. The two units feature the interior built-ins and finishes designed by Hadid alongside interior design schemes envisioned by Jennifer Post and West Chin, respectively. 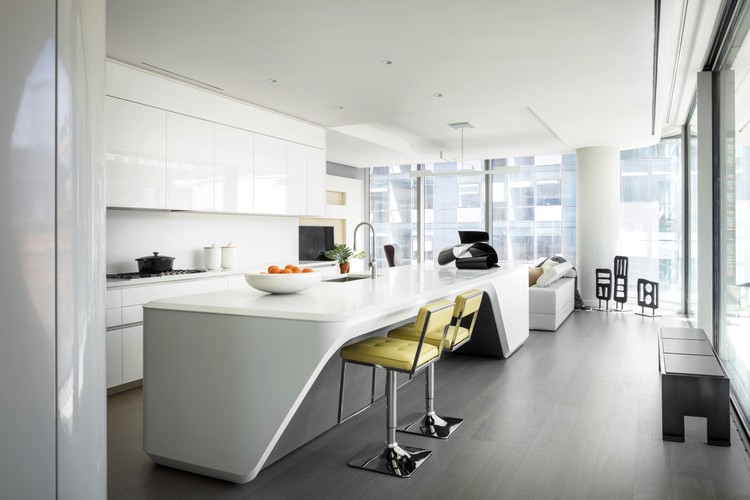 The larger of the two units, the $15 million dollar Unit 20 contains four bedrooms and features views of the High Line and the Empire State building. The interiors have been outfitted by Post in a dynamic palette of white and muted tones, with pops of color introduced in contemporary furniture and art pieces. Post’s choices were aimed at “[igniting] the architectural vision of Zaha Hadid, while preserving her voice and identity, and highlighting the seamless synthesis of indoor/outdoor living.”

"I am usually the creative visionary behind both the architecture and interior design of a space. Here, I am respectfully creating a vision that coexists with the vision of one of architecture's greatest minds,” explained Post. “This prompted me to really consider every move, every decision in a different, special way."

The interiors of the $4.9 million Unit 12 were completed by West Chin, principal of West Chin Architects. Chin’s approach was one of minimalistic functionality, resulting in a layout that would attract a range of couples or single dwellers. Furniture pieces were chosen to take advantage of light from the unit’s large windows and the sensory architectural elements.

The 11-story building contains a total of 39 residences across 21 interlaced levels. Units range in size from two to five bedrooms and are priced from $4,950,000 to $50 million for the three-story penthouse. The two completed residences will be used as model unit sales galleries as the building approaches its expected June 2017 move-in date.

Real Estate firm Related Companies has announced the development of 15 new art gallery spaces to be located in and around the base of Zaha Hadid's 520 West 28th Street residential building, located along the High Line in the New York neighborhood of Chelsea.

Zaha Hadid has unveiled her first New York City commission: an 11-story, luxury apartment block planned alongside the second section of the High Line in Chelsea at 520 West 28th Street. 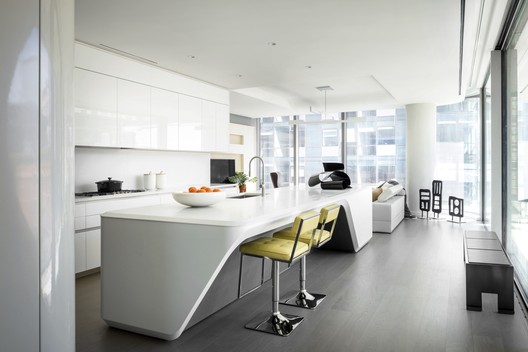