The Norwegian Coastal Administration has revealed visualizations of the world’s first full-scale ship tunnel that would link two fjords on either side of the Stad Peninsula in Norway, allowing ships to bypass the “most exposed, most dangerous” waters on the Norwegian coast. With the project now in the feasibility stage, architecture studio Snøhetta has produced a series of rendered design concepts to help the project gain traction within the Norwegian government. 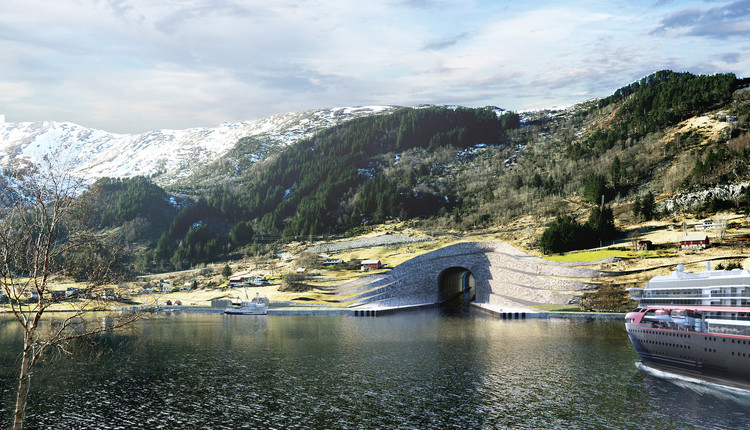 The Stad Ship Tunnel would measure 1.7 kilometers long, 36 meters wide and 49 meters tall – large enough to accommodate full-sized boats such as large cruise ships, sailboats, and coastal steamers. Traffic would pass through one way at a time, but even with a waiting period, the tunnel would chop off significant time and hazard from the existing route around the peninsula. Estimates show that between 70 and 120 ships could use the tunnel on a daily basis.

Working with Olav Olsen of Norwegian consulting firm Norconsult, Snøhetta has designed the two entrances to the tunnel using the material palette of the peninsula, with both wire-cut and blasted stone walls making up the opening arches. On the Moldefjorden side, the design would utilize the steep landscape to create a dramatic entrance. A more sensitive, terraced opening would pop out at Kjødepollen, where a small village is located.

The idea for building a ship tunnel through the Stad Peninsula has been discussed for over 100 years, with original plans documented as far back as the 1870s. Historians have even discovered that Vikings often preferred to portage their ships over the 1.7 kilometer stretch than sail through the dangerous seas.

Initial cost estimates for the project come in at 2.3billion Kroner (~$270 million USD). The Norwegian Coastal Association is hoping to receive a final political decision soon. If approved, construction could begin as early as 2019. 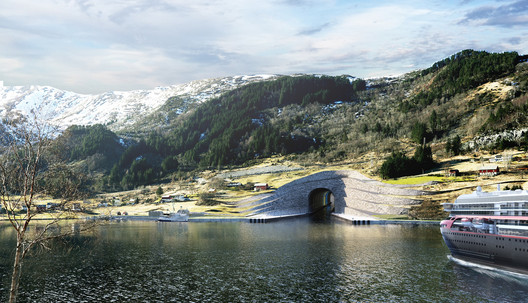