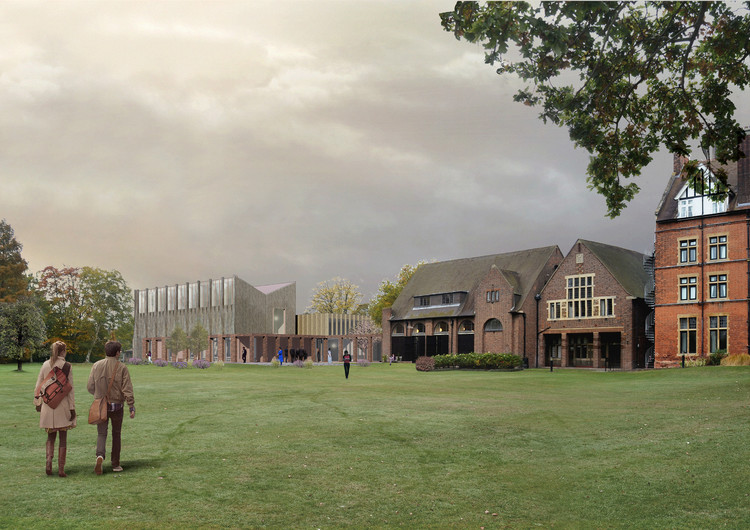 The competition brief called for a 300-person dining hall on the college’s 25-acre campus that would serve as “a spectacular and unique architectural composition that relates to the rich and diverse mix of buildings around it and enhances the natural loveliness of the setting.” Feilden Fowles described their solution as an Arts and Crafts building for the 21st century, which could convey formality at times and comfortable familiarity at others, all while celebrating “the integrity and inherent beauty of materials and craftsmanship.”

“This development will encapsulate much of what Homerton is about: a creative, inclusive community that is ambitious to contribute to the wider society,” continued Ward.

“The opportunity to make an environment that is physically beautiful and functions elegantly is a rare privilege, and if on a deep level it can also encourage mutuality, the sharing of ideas and motivations, then it really has the power to inspire current and future generations.

The winning design features an expressive form that will serve as an “uplifting climax” to the College’s line of buildings along Harrison Drive. Masonry piers set with windows will maintain a pleasing rhythm across the site, connecting the new Hall to its setting and framing views for diners within. Located above the plinth, “a faience and glass corona leads the eye upwards to the wide East Anglian sky.” Rich, sensory details on the interior and facade will further contribute to the building’s comfortability and presence.

“We are thrilled to win this open competition to design the new dining hall for Homerton College. We feel very honoured to be given the opportunity ahead of more established practices and feel it reflects the genuine openness of the competition process, as well as the College’s belief in investing in young talent,” said Fergus Feilden, Director of Feilden Fowles.

“The project offers a unique chance to create a transformational space at the heart of an already stunning site. This is a privilege we do not take lightly and we are determined to deliver a world class facility. We can’t wait to get started.”

Feilden Fowles will now continue to develop their design in partnership with the College. The initiative is part of Homerton’s wider strategy to improve campus facilities as the College celebrates its 250th Anniversary next year. Construction is scheduled to begin in Spring 2018.

Homerton College, a constituent college of the University of Cambridge, announced today the five firms shortlisted in the competition to design a emblematic £7 million ($8.5 million USD) centrepiece building to house a 300-person dining hall for the school. The finalists were selected from an original pool of 155 architects, from which 24 were selected for the longlist.