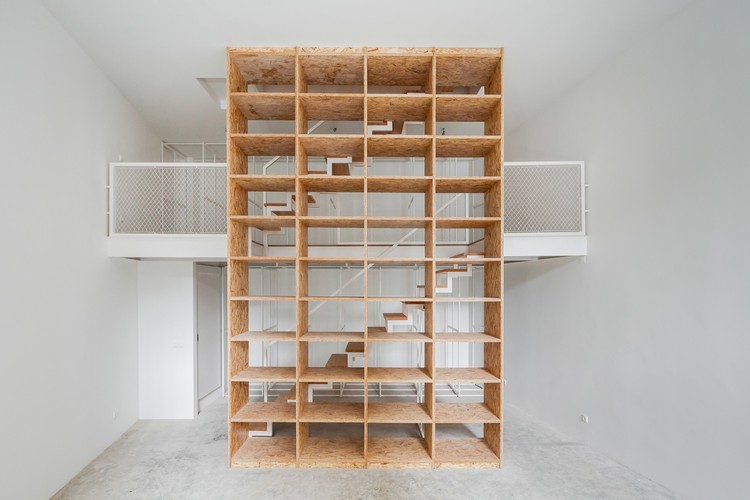 Text description provided by the architects. The project was designed for a building located in the historical center of Porto, a part of a block composed by 4 buildings built in the early XX century.

The building had two separate areas: a store and a house, with no link in between them.

The program is characterized as "home for an artist ". The owner is a Porto established artist that intended and aimed to join in this building his house, his studio and his large collection. All in the same space.

The urban landscape and context of the building was determinant for the choice to recover the entire facades, as to give back the building's original aesthetic concept and feel.

Due to the degrading shape of the building, as well as modern-day living and design patterns, the decision was made to demolish the whole inside area, leaving only the slab that separates the store from the housing area.

The pre-existing structure of the building was used to create a vertical loft layout made up of 4 storeys, crossed by a single, vertical, 9.6m height, loose, multi-purpose element, which separates and shapes the layout of each floor. The only closed space is the bedroom.

The studio and the storage area where put into the first and second floors, making up a single section that is divided by a mezzanine. Along both of the 1st and 2nd floors, the central element functions both as a separator between the studio and the storage area as well as a large scale shelf, where the property owner's thousands of small drawings and sculptures are to be stored.

The third floor is where the living area was placed. Here, the central element is transformed into a kitchen holder, dividing the space into a kitchenette style living room and a small foyer, where the original main entrance is located.

The last floor is a central mezzanine, supported only by the lateral walls and with view to both sides of the house, where the central element is once again transformed into a shelf. The staircase cuts through the building, siding the multi-functional central element, which allows to shape and underline the vertical loft concept and language that was used on this project.

The walls, ceilings and carpentry were painted in white, microcement in grey color is used in the floors and OSB was chosen for the central element for its color and texture. But still there was a clear concern of creating small links between the old identity of the building and the new, by using materials such as wood in its natural color on the staircase, tiles on the bathroom and crafted hydraulic tiles in the kitchen pavement.