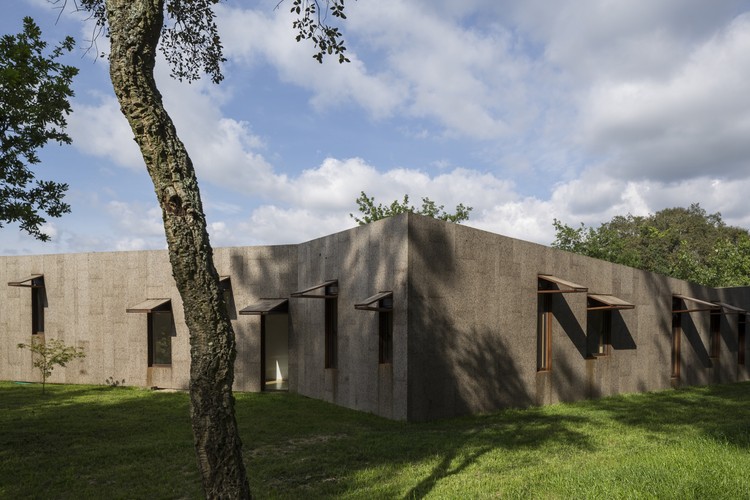 Text description provided by the architects. Situated in a village in the North of Portugal, it lies between arable land and a pine forest. For a household of five, the house consists of four sleeping rooms, kitchen, dining room, living room, laundry room, a small music studio and a porch.

Its footprint was adjusted to the existing terrain and integrated in the landscape, its form revealing the principle of not tearing down existing trees. The construction system held a principle of economy where traditional building solutions were adopted, and crucial values were recovered in order to create harmonious architectural, landscape and social relationships. In this context and to boost indigenous economy, construction work was carried out by a local contractor.

Structural/infrastructural measures were implemented together with the respect for the environment, aiming to promote a balanced, self-powered life-cycle of the house.

The use of natural cork as a material of great abundance in Portugal accumulates multiple advantages. In addition to being biodegradable, it has great thermal efficiency - in this case efficiency is optimized, combining insulation and cladding in a singular material, therefore avoiding an entire layer of material and inherent costs.

The house's form and orientation permit the best solar exposure for each room. Shading is adjustable by doors / flaps designed for the purpose. The house lies on a raised slab in order to allow natural drainage of rainwater.

Terrain modeling made use of the remains of its construction. An existing watercourse passing through the site was revitalized to implement an irrigation system, enabling the plantation and maintenance of new fruit trees, a resource of strong regional expression.