Save
Fighting the Neoliberal: What Today's Architects Can Learn From the Brutalists
Share
Or
Copy

In this second installment of his revamped “Beyond London” column for ArchDaily, Simon Henley of London-based practice Henley Halebrown discusses a potential influence that might help UK architects combat the economic hegemony currently afflicting the country – turning for moral guidance to the Brutalists of the 1960s.

Before Christmas, I finished writing my book entitled Redefining Brutalism. As the title suggests I am seeking to redefine the subject, to detoxify the term and to find relevance in the work, not just a cause for nostalgia. Concrete Brutalism is, to most people, a style that you either love or hate. But Brutalism is far more than just a style; it is way of thinking and making. The historian and critic Reyner Banham argued in his 1955 essay and 1966 book both entitled The New Brutalism: Ethic or Aesthetic that the New Brutalism began as an ethical movement only to be hijacked by style. Today, it is a mirror to be held up to the architecture of Neoliberalism, to an architecture that serves capitalism. More than ever, architecture relies on the brand association of the big name architects whose work has little to do with the challenges faced by society, which are today not unlike the ones faced by the post-war generation: to build homes, places in which to learn and work, places for those who are old and infirm, and places to gather. We can learn a lot from this bygone generation. 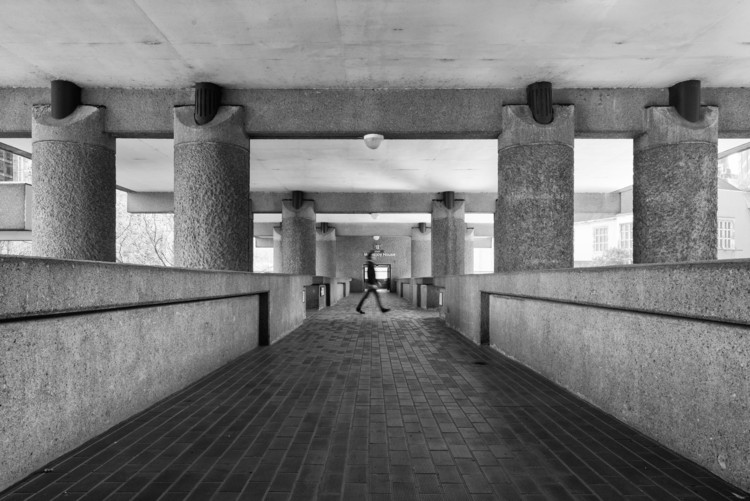 As I said in my last column, “It's time architecture once again became more a part of how we conceive the future of our cities rather than how we might style our future.”

Brutalism first presented itself to me, then an undergraduate, as a multistorey car park in the glossy landscape format pages of Dietrich Klosse’s 1965 publication Multistorey Car Parks and Garages, with its black and white photos and sans-serif font. The “high period” of car park design revealed them to be materially tough, skeletal buildings, which behind their primitive facades concealed liquid floors cast into darkness by heavy shadows. On a bicycle or a skateboard these spaces are joyful. Alone on foot and at night they can be malevolent. Soon this interest led me to Le Corbusier’s béton brut in India and Kahn’s “molten stone” in the States, much of which I visited. Soon, multistorey car parks became a portal through which to connect to a generation of buildings, especially to the Hayward and Queen Elizabeth Hall on London’s South Bank, the subject of my student design thesis.

By the mid-1930s Le Corbusier had rejected both his earlier white plastic Purism and his faith in technology. Like Kahn he seemed to want to address more profound existential questions. So too did Sigurd Lewerentz. Writing about Lewerentz’s brick church, St Peter’s, in Klippan, Adam Caruso says, “It is as though Lewerentz is compelling us to confront the condition of our existence, all of the time.” In a similar vein, Juhani Pallasmaa mourns the loss of sensuality. As he explains in his book The Eyes of the Skin: Architecture and the Senses, “the machine-made materials of today – scaleless sheets of glass, enamelled metals and synthetic plastics – tend to present their unyielding surfaces to the eye without conveying their material essence or age.” While these architects and their works were exceptionally potent, they were not unique. The Scottish architectural practice Gillespie Kidd and Coia created hugely powerful works for the Catholic Church, most notably St Peter’s Seminary, Cardross, which is currently being renovated by Avanti architects to create an arts venue, and St. Bride’s Kilbride, whose bell tower was demolished in the 1980s but which the church is now seeking to reconstruct. Gillespie Kidd and Coia's work stretched south of the border to the University of Hull where they designed The Lawns student residences and to Robinson College Cambridge.

Denys Lasdun, although never a member of Team 10, shared their interest in Structuralism and “association.” These ideas were first evident in his “cluster” flats on Claredale Street in London’s Bethnal Green – ideas that moved Victor Bodiansky, George Candilis and Shadrach Woods to write to Lasdun about their common interests. Lasdun would scale up his thinking at the University of East Anglia – Mike Webb, the author of the 1969 publication Architecture in Britain Today, likened its organic structure to that of a tree. Its industrialized production in precast concrete is in stark contrast to its 18th-century parkland setting, and yet the logical trunk of infrastructure for pedestrians and services, with a wall of teaching blocks behind and residential ziggurats in front, represents an unfamiliar but nonetheless picturesque world in which to live and study. Lasdun’s re-imagination of higher education was repeated up and down the country at the new universities, in Essex by Kenneth Capon of the Architects’ Co-Partnership, at the University of Sussex by Sir Basil Spence, Bonnington and Collins, and at the University of York by Robert Matthew, Johnson-Marshall and Partners.

In Oxford and Cambridge this generation of architects challenged convention, finding new ways of representing these medieval institutions and their constituent colleges: Churchill College, Cambridge, was the subject of a competition won by Richard Sheppard, Robson and Partners in 1958; New Hall, Cambridge, and St. Anne’s, Oxford were also completed by finalists of the Churchill College contest – Chamberlin, Powell and Bon and Howell Killick Partridge and Amis, respectively. Recently 6a Architects completed a new block of student housing at Churchill College. Perhaps what’s most important about 6a’s design is how the tectonic properties of their new courtyard mimic those of the original only in scale, reminding us that the courtyard type is not a hackneyed nostalgic idea, but one that signifies collective purpose, and common ground for individuals and groups brought together by the pedagogic and physical structures of the institution.

The list of higher education buildings from the 1950s and 1960s is long – whole colleges, departments, and student halls all shaped to structure activity and engender behavior, not just styled to look a certain way. Durham University’s Dunelm House – a collection of concrete pitch-roofed cafes, lounges and assembly spaces – cascades down the steep slopes of the Wear valley to its own boathouse by the water. This too was designed by the Architects’ Co-Partnership, this time Dick Raines, and is currently under threat. Unlike many contemporary university buildings, the tough interiors are durable. Inside, the concrete has much in common with the stone walls of a historic street, the architecture more ambiguous, more that of a city than a building. In other words, it has the capacity to support the social life of a community of students without recourse to branding so evident in the fashionable form-finding, shape-making and self-conscious selection of materials inside and out that serve the current arms race in higher education.

These architects had a brave new world in mind, one that would serve the goals of social democracy, that would bring higher education to a wider spectrum of society, that would create new neighborhoods like Park Hill in Sheffield where the original architects Ivor Smith and Jack Lynn worked with a sociologist to distribute the variety of households within its frame. Today, commissioned by developers Urban Splash, architects Hawkins\Brown, Studio Egret West and Mikhail Riches are modernizing the estate. Here, terraced streets were famously, and to a great extent successfully, replaced with “streets in the sky.” The idea of streets-in-the-sky had first been mooted by Lynn and Gordon Ryder, and the Smithsons, in their entries for the 1951 Golden Lane Competition. As the Smithsons' explained these “habitats” – a term they used deliberately to conflate dwelling, neighborhood, and city – should be thought about systemically and structured for the “association” of people.

Architects worldwide have petitioned unsuccessfully for the Smithsons’ later “streets in the sky” housing Robin Hood Gardens to be protected. Unlike Park Hill, it won’t be given a second chance, and will soon be demolished, despite a proposal to adapt the building by Sarah Wigglesworth. And yet for all of Robin Hood Gardens' faults, which are hard to disentangle from the neglect that these buildings have been shown, there is at the heart of their conception a profound idea that they may frame and protect an internal landscape from the vagaries of the city, and in so doing create what Peter Smithson described very movingly, at least with hindsight, as a “stress free zone.”

The challenge that Robin Hood Gardens really presents the politicians lies in their reluctance to protect this “stress-free zone” because in their eyes it’s a waste of space. Of course, the site can accommodate far more homes, but will expose its future inhabitants to a more congested, and by definition, stressful environment. The Smithsons took inspiration from the English tradition of building in parkland and sought to compare their housing to the Georgian crescents and circuses in Bath and the landscapes that they capture, all of which is anathema to the high land values of the current city. The Barbican is the heir to Peter Smithson’s phrase “stress free zone,” a part of the city that will always serve as a refuge from the orthodox city beyond its walls – from the commercial realities of property development, commerce and shopping; the technologies of movement and mass transit; and the noise, smells and danger that these bring with them.

What distinguishes this work from the current generation of buildings is the capacity of all involved to come to the table with few preconceptions. By the 1960s, despite the subsequent vitriol about the period, there was an acute interest in the social life of settlements, and an awareness of history but still immense confidence in the future. Be it Powell and Moya’s Chichester Festival Theatre or Peter Womersley’s Nuffield Transplantation Surgery Unit in Edinburgh, the client, the engineers and architect dared to show their innocence and to exploit the possibilities of that innocence. Today that innocence has gone, and has been replaced by fixed ideas and much too much regulation. Both building fabric and space are strictly codified. Strong preconceptions have replaced constructive doubt – a phenomenon that allowed teams to arrive at a practical solution that one could not have foreseen. Sometimes these architects’ notions were naïve, but there is no question that they worked with a strong sense of purpose and real conviction. Theirs was a hugely inventive architecture driven by a collective purpose, with the capacity for real humanity, however flawed, and for the picturesque and the sublime. Today, where there is aspiration it is more often than not to serve the market, skin-deep and shortsighted, be it funded privately or by the state. In practice, there has been a tragic loss of innocence – an innocence that for a generation served the future of society very well.