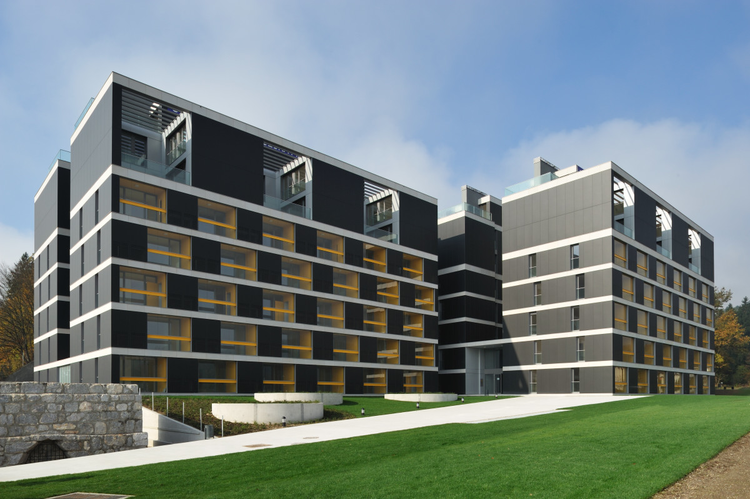 Text description provided by the architects. Housing Pilon stands in an unusual location, on the site of an abandoned quarry next to main Ljubljana ring road. The remains of the quarry previously appeared as a ‘wound’ in the natural landscape with an old, lime-kiln building made of stone in the corner of the site, which was protected as a cultural monument. The question was how to position a new large housing complex in such delicate surroundings, how to preserve the quarry and design the housing as new landmark related to the highway passing right next to the site.

The location was treated sensitively. The rock wall was preserved, protected against crumbling and planted with greenery. 140 apartment units were structured into a complex of two separate buildings that are further divided into two slabs connected by communication cores. The slabs are shifted, they follow the configuration of the terrain and create different communal spaces, the concrete entrance platform in the front and green courtyard at the back side of the complex.

The internal structuring of the complex follows the idea of ‘condensation’ of the city condition vertically: smaller, single person units are positioned in the lower part of the buildings. They are followed by duplex apartments which are organized as patio villas around open, double height courtyard spaces. Luxurious small penthouse apartments are built on top. These different typologies are clearly visible on the facade, yet the overall image of the complex appears homogenous.

The facades are designed as interplay of opened and closed elements. Glazed balconies with yellow railings are followed with closed storage units made of velvety black ferrocement plates. Storages thus become an element of the facade and divider between different apartments.

The complex is in tune with the silhouette of the hill and is simultaneously paying a kind of ‘hommage’ to the former quarry but at the same functions as a eyecatching ‘landmark’, a strong orientation point on the Ljubljana ring road. 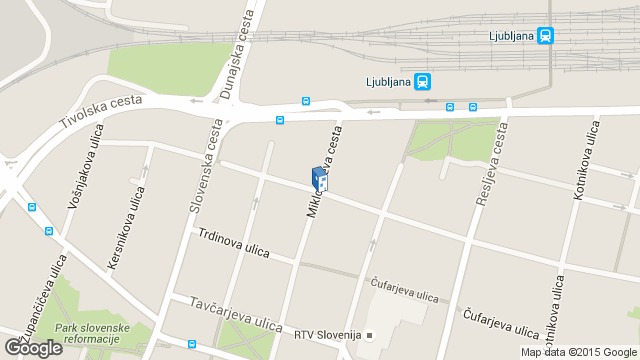 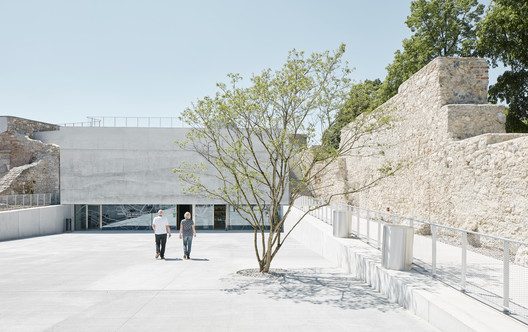