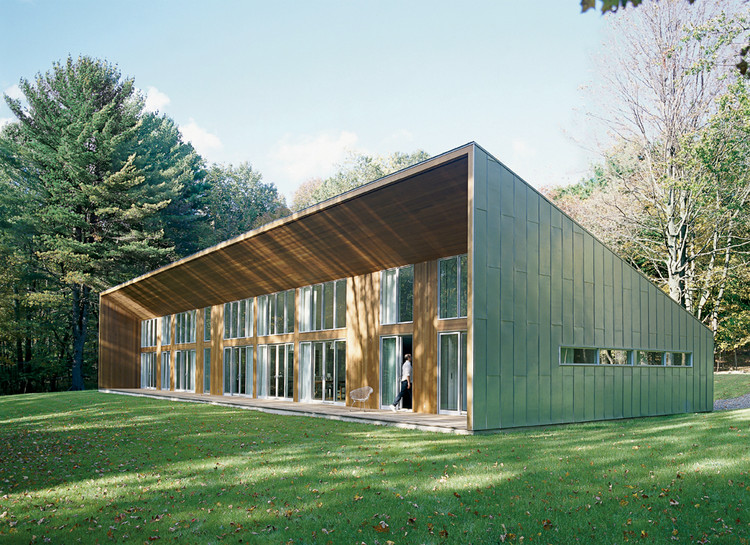 The Texas Hill House was developed for a young New York City couple as a retreat from the demands of urban life. It is located in Craryville, New York, a town at the base of the Berkshires in central Columbia County. The house is a portrait of the clients’ disparate experiences working and traveling extensively throughout Europe, China, Japan and South America. One born and bred in New York and the other a Costa Rican national of Asian descent, both brought very different aesthetic traditions to bear.

The form of the house directly responds to its site conditions and orientation. While the Texas Hill house is located on twenty-five acres, only eight are practically useable. A federally protected wet land dominates the remainder of the property, which will be developed into a private “park” and will be registered as a “Conservation Easement” through the Columbia County Land Conservancy (www.clctrust.org/home.htm).

All of the rooms in the house orient toward the open and primarily glass side of the home facing southwest. A ten foot eave cantilevers off this façade, protecting the interior from heat gain in the summer when the sun is higher in the sky. Additionally, a stand of trees forward of this elevation was pruned of its conifers leaving primarily deciduous trees to support heat regulation. In the summer months, leafed trees filter the direct afternoon sunlight. In the winter when the sun is low and the trees bare, the afternoon sun warms the interior to reduce heating loads.

The primary roofing and siding material for the project was selected for its recycled content, durability and affordability, not to mention its stunning medium grey color. Zalmag is a galvanized coating on steel made of 95% recycled material consisting of 11% aluminum, 3% magnesium and 86% zinc. These panels are 100% recyclable, have a service expectancy of at least a lifetime, and when compared to traditional galvanized coatings, Zalmag has a 10X plus corrosion resistant factor.

The windows throughout Texas Hill are Loewen, which is the first major North American window and door manufacturer to receive Forest Stewardship Council (FSC) chain of custody certification (SW-COC-1739) for Douglas Fir wood used in its fenestration products. 88% of the Douglas Fir purchased by Loewen comes from forestland that is Sustainable Forestry Initiative (SFI) certified. In addition to SFI certification, many of the Douglas Fir suppliers in Canada are ISO 14001 and/or CSA certified.

Geodetic design is a method in which structure and skin function independently. Often used for aeronautical construction, the geodetic process forms multiple stringers into an aerodynamic, basket-like configuration. This redundant arrangement, light, strong, and rigid, can survive localized damage without catastrophic failure. A non-load-bearing skin completes the aerodynamic shell.

American wood frame construction can be viewed as geodetic design, such that exterior surface functions autonomously from structural elements.

The Texas Hill house nods to this American tradition. A standard and locally available truss fabrication technology achieves the primary long span roof structure. Since the mid-seventies in the US, digital information design has interfaced with ordinary manufacturing techniques in an industry dedicated to the mass production of residential roof trusses.

Although the building’s engineered structure establishes its unique expressiveness, its skin suppresses structural detail, which reveals itself only in the atypically deep eave cantilevers and the broad internal span.

The empty cavity of the loft, enclosed by the roof truss and the two long bearing walls, is undifferentiated, neutral space. Like the human rib cage, this loft functions as a structural shell, containing and protecting the living spaces within. Non-bearing partitions specify the program for internal usage.

Minka (民家), literally “house of the people”, is a category of traditional private residences in Japan with two major classifications: farm houses (Noka 農家) and sub-urban houses (Machiya 町屋). The design of Machiya maintains privacy from the public thoroughfair, yet simultaneously orients toward the farmland or gardens beyond. Whereas the front of the typical Machiya is almost entirely closed to the street, the rear of the home opens up to the landscape through the use of sliding shoji screens.

A base skeletal structure of the roof, walls, and support columns is the central component of the Minka’s construction. Wooden columns and crossbeams intricately interlock without the use of nails. Internal walls are not fixed, but consist of sliding wood lattice doors or wood-and-paper screens called fusuma. Like geodetic design, non-structural elements give specificity to a neutral space.

Given the wet lands that encompass the property, Texas Hill had to be located quite close to the country road. To maintain privacy and to diminish the structure’s apparent scale from the road, the entrance façade, which faces this approach, is low and primarily closed. Two twelve foot wide sliding louvered doors that screen full height glazed areas allow light and air to penetrate this façade while retaining visual separation from the road.

The term "fourth wall" signifies the boundary between the fictional and the real. Originating from Bertolt Brecht's theory of epic theatre, the phrase, the fourth wall, describes the suspension of disbelief between a fictional work and an audience. In theatre, "breaking the fourth wall" generally refers to a character showing his/her awareness of the audience, thus accentuating the audience’s recognition of the character’s fictional existence.

The front and back “porches” of the Texas Hill house frame the entirety of those elevations, creating a proscenium, frame or phenomenal membrane through which one views or moves between nature and the domestic zone. These sharp and absolute “fourth walls” dramatize these transitions as both real and artificial.

The rear or garden façade emphasizes this shifting experience by opening up to the view beyond, offering a change in scale that responds to the landscape, and that becomes the fourth wall of an outdoor “room” bound on three sides by the green walls of the forest.

The history of built form can be viewed as a dialog between the romantic, accommodating structure and the internally logical, platonic one, between the passive and the aggressive object. Interestingly, both perspectives of this dialog can find expression in a single passive aggressive structure.

The Greek Stoa, Friedrich Schinkel’s Altes Museum and Palazzo dei Congressi, simultaneously possess an aggressive, platonic form and a passive, dependant role in relation to the Agoura, the Lustgarten, and Piazza John Fitzgerald Kennedy, respectively. Similarly, Casa Malaparte functions as both an object within a dramatic landscape and as a mere platform from which the landscape can be viewed. Luytens' Tigbourne Court presents a perfectly symmetrical, landscape-dominating form to the arriving visitor, only to decompose into a romantic and asymmetrical composition on its garden side.

Texas Hill plays the same game. Its perfectly symmetrical façade offers a readily discernable object, a shed structure, upon arrival. Its logic breaks up, however, into a syncopated asymmetry under the pressure of programmatic idiosyncrasy at the rear façade. It is both an aggressive object and a passive back drop, or “fourth wall”, for the drama of the natural.

The design of Texas Hill consciously integrates oppositions: of Eastern and Western traditions, built space and natural space, symmetry and asymmetry, and of material, while thwarting resolution in favor of an open ended, shifting dialog. Through its reinterpretation of historical strategies through the lens of contemporary, sustainable materials and construction methods, a unique phenomenology infuses the site, one that forces the visitor to encounter the contrasting elements in its design. Ultimately, Texas Hill is a synthesis, whose individual parts, both physical and conceptual, coexist as a portrait of its owners’ personal, globalized aesthetic. 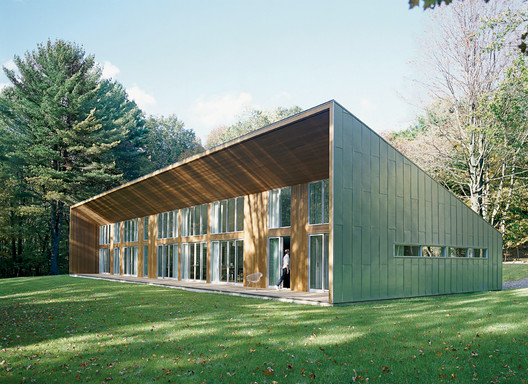