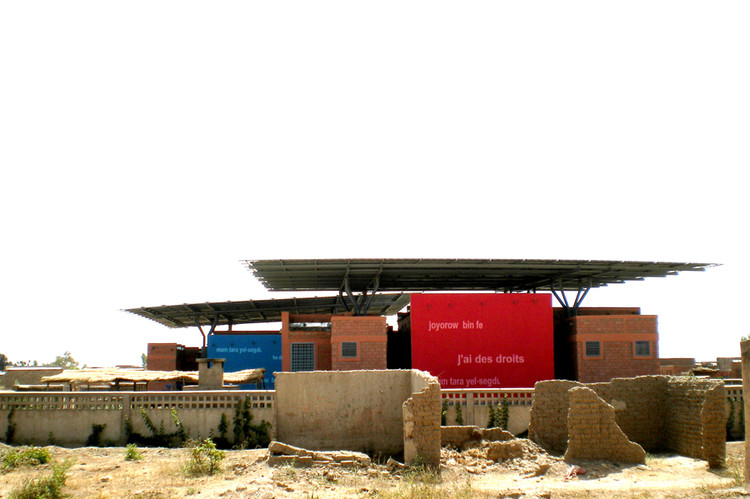 Text description provided by the architects. This project just won the Health Category Award in the World Architecture Festival.

Project description and some great pictures of the construction process after the break.

The CBF Women's Health Centre in Burkina Faso was created between 2005 and 2007 by AIDOS, an Italian NGO fighting for Women's Rights in Developing Countries.

The AIDOS project, financed by the Democratici di Sinistra Political Party and with a contribution from the European Commission, is just one of the group's international programs focused on contrasting the diffusion of Female Genital Mutilation .

The social/health-services program developed by AIDOS, together with its local partners was focused on providing the educational services, information and awareness about women's sexual and reproductive rights in Sector 27 of Ouagadougou, a peripheral urban area settled by the rural population.

The social program called for the realization of a building complex capable of hosting a variety of activities in very harsh circumstances. The architectural project represents the response to this condition.

Completed in 15 months by a local builder, under the direct supervision of FAREstudio, the CBF is functionally and cost-effective answer to the needs expressed by AIDOS, while simultaneously and primarily representing a centre of aggregation and identity for the entire local community.

The technological and typological responses offered by the project, on par with its social programs, represents an innovative approach to traditional local building practices, presented as the natural formal expression of the changes and new approaches promoted by AIDOS.

The project privileges an integrated approach to interactions between built space and climatic-environmental conditions , based on considerations of sustainability and appropriateness.

The project is based on the separation of the primary activities performed by the CBF into two distinct, though closely related buildings: a Training Centre dedicated to activities of awareness-building and the administration and management of the CBF, and a Consultancy Centre, used for medical visits, legal assistance and psychological counseling.

The two main buildings are set atop a single structural element: a raised platform that creates a true artificial plane that supports various buildings used for different purposes. The raising of the platform above the ground ensures hygienic/climatic conditions that are extraneous to local culture and practices of building .

The two main buildings are protected against rainfall and, above all, direct sunlight, by a light, waterproof PVC recyclable velarium, supported by an independent structure of steel 'trees'. This sloping tarpaulin is part of a system that collects and stores rainwater, which is used to irrigate the garden.

The volumes that contain the various rooms are independent of the roof structure and freely placed atop the platform. They are articulated around a series of shaded and ventilated patios that ensure privacy from the exterior. The modular configuration of the structure allows for future expansion, preserving the general framework of the building.

The building walls are constructed using compressed dry stacked clay bricks, BTC , made on site using a rough mixture of earth, cement and water. The bricks were baked in the hot sun, with no energy consumption, thus limiting the environmental impact of the material.

The choice to use these bricks is based on their temperature and humidity reduction characteristics, enhanced here by their protection against contact with water, perhaps the only serious limitation they pose.

The choice of using this technology represents the desire to introduce alternative and sustainable technologies within a context that is tied to standardized, though not always optimal building practices, and to the importance of importing foreign materials.

The buildings are covered by corrugated aluminum and translucent decking, which allows light to filter into the interior, reducing the need for artificial illumination.

The space between the steel roof and the velarium, the open cavity underneath the platform, together with the exterior openings fitted with operable glass fins, help to improve the natural ventilation of interior spaces, drastically reducing the need for mechanical air conditioning.

The exterior space, similar to the interior, is designed as an open area to be used by the entire community. It is a space of sharing and of information, used to present the themes dealt with by the CBF. Indirect and informal communication is also favored by the organization of small events and public discussions. The garden is a micro environment that surrounds the buildings taking advantage of the shade provided by the building and trees and the humidity produced by the plants.

A layer of grass covers the earth, reducing the effects of erosion, while various species from Western and Sub-Saharan Africa have been planted with the twofold intention of creating shade and promoting the return of autochthonous vegetation.

of hot wind and taking advantage of mutual over shading

• the shading of heavy material against direct exposure to the sun

• extensive use of operable windows

• the separation of enclosed areas by transitional spaces, such as

Being water and power are not available in the area, the Centre is fully independent, integrating the systematic control of consumption and the self-production of resources, possibly renewable.

Water is provided by a newly drilled and dedicated well.

In order to achieve independence from external sources, photovoltaic cells have been installed along the perimeter wall, reducing the use of the electrical generator.

All this affects both personal behavior and collective responsibility: elimination of mechanical air conditioning is probably the major achievement of the project in terms of environmental sustainability.

The outside walls, with no openings, are finished with a plaster coat, painted with bright colors.

The local NGO's slogan, translated in 5 languages, completes the decoration of the walls. Each wall becomes a canvas, presenting the social message in an informal way.

Internal finishes such as the colorful mosaic tiling have been realized with the aim of combining a pleasing appearance with ease of construction, using locally available materials in a different, playful way. 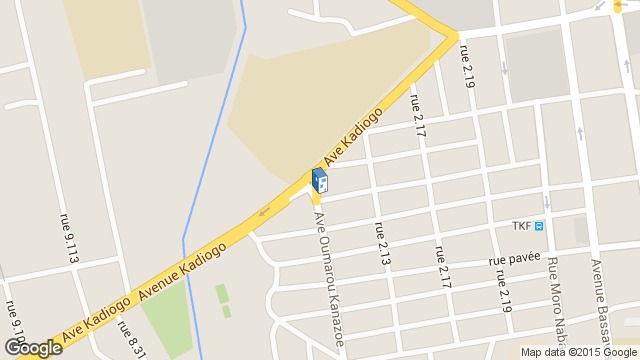 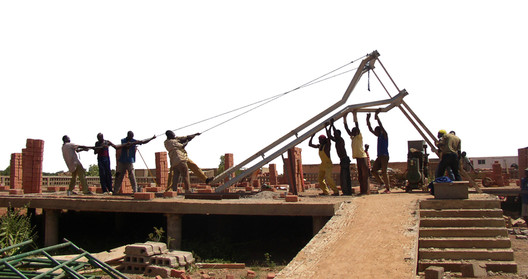